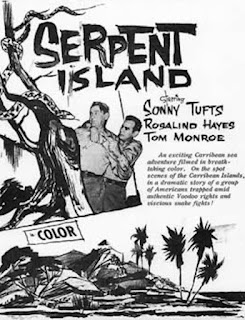 Well they can’t all be good. In an effort to find some different stuff to cover for the Fab Friday series I’ve been looking for some movies that I’ve not seen before. Normally I would have passed on Serpent Island, but then I noticed the cinematographer was Bert I. Gordon, so I was interested. Probably should have followed my first instinct on this one.

The plot is very simple. There is a girl who is descended from a famous family. They have a legend that one of their ancestors left a fortune of gold in Haiti when they had to flee during the revolution. She has a clue to where it is at and hires a boat as well as an engineer to take her there and help recover it. The captain of the boat and the engineer don’t like each other, and both want to spend quality time with the lady who hired them. The rest of the movie is… well nothing really. We do end up seeing the gold and at the sixty-minute mark of a sixty-three-minute-long movie there is a snake. So, there is that I guess?

This is a terrible movie. I know that I’ve said that before while writing reviews here at the Horror Dude Blog, but this is the worst. The first thing that you will notice is that the movie is in color, which is odd for a low budget fifties flick. But I figured out pretty quickly why that was likely done. Rich people loved shooting their own home movies and color was all the rage around the time that this movie was made. Why do I mention this? Because it is clear that they had a lot of footage of a sailboat and of voodoo ceremonies that are clearly staged for tourists. What can you do with that? Well shoot some wrap around stuff on a sailboat with the cast and then record a voiceover anytime you are using the other footage to explain what is going on and you have a movie. And I’m not making this up while doing my research for this review I found a rumor that the producer shot a bunch of vacation footage and when offered a chance to make a “B” feature on the cheap used it.

What is insane with Serpent Island is that the movie is barely over an hour long and has at least half that time taken up with stock footage aka. vacation home movies and they still didn’t have enough story to keep it going. Basically, they couldn’t fill thirty minutes of screen time with scripted dialogue and action. I have difficulty even calling this a movie when there isn’t anything of note to be seen. I guess this would have been perfect for the second or third feature at a drive-in when the teenagers had other things on their minds. Then again this could have easily killed the mood and put everyone to sleep. God this thing is awful.

I debated even reviewing this for the blog. I eventually decided that it was important not to gloss over the fact that there are a lot of movies like this from the fifties. Much like the start of the VHS craze there was a need for material to show in the drive-ins so quality control wasn’t always a priority. You will find cobbled together quickies like Serpent Island on a lot of Public Domain collections and online. If I can warn one person off, then my hour watching this turkey was worth it… Okay not really but it makes me feel better. Not recommended.

note: I couldn't find a trailer for the movie and I wasn't going to post a link to the full movie. Seriously people don't watch this one!

Posted by Gutmunchers Lives at 11:00 AM No comments:

This sequel finds our main characters Peter Vincent and Charley Brewster moving on with their lives after their fight with Jerry Dandrige. Thinking that another vampire encounter couldn’t possibly happen again Peter has returned to hosting horror movies on the television. Charley is now in college and is seeing a therapist who has convinced him that vampires aren’t real. This is with the encouragement of his new girlfriend Alex, who knows vampires can’t be real. Clearly Dandrige from the original movie was a serial killer and thru some sort of group psychosis they only thought he was a vampire. 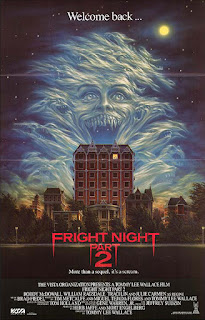 Now of course this is a perfect time for another vampire, this time a lady, to move into Peter’s building with the rest of her band of undead followers. It isn’t a random encounter though since she is the sister of Dandrige and is in town to get some revenge on the pair of vampire hunters. This leads to some interesting stuff as at first, she passes herself off as a performance artist to fool Peter and Charley into thinking they had overreacted. But again, the mirror in Peter’s cigarette case gives the secret away. Unfortunately, the lady vampire, Regine, has already been setting her plans in motion slowly turning Charley into one of them and taking Peter’s show away from him. This leads to a big showdown where in a reversal from the original Peter and Alex have to rescue Charley from Regine’s grasp while battling her crew.

It is going to be hard to not compare this movie to the original as it recycles the characters and in many ways the plot. Right off the bat it loses some points for not being terribly original, but still the movie has its moments. No time is wasted in getting to the bloody bits as we already know about the world in which these movies take place. The characters are quick to accept the existence of the vampires and the rules on how to kill them. That void in disbelief and eventual acceptance from the first film is partially taken up by us having multiple vampires including one that is almost more werewolf than bloodsucker. So basically, we get more action. This leads to some weirdness like the roller skating undead that didn’t work for me as well as the comic relief of the incompetent hairy vamp that keeps getting picked on for not biting his victim in the neck.

The special effects are decent with the three vampires looking very different from each other. Though in a nice touch they do make the various forms of Regine look similar to her brother from the first. I notice and enjoy that kind of attention to detail and like to point it out. The kills are also enjoyable with exploding vampires, guts full of maggots, and of course a stake to the heart. Though the humor is played up a bit more in the deaths than the original which takes away from the gore somewhat.

Whenever you make a sequel to such a great movie it is going to be tough to live up to it. This was mitigated by the involvement of Roddy McDowell returning as Peter Vincent and William Ragsdale as Charley. But I do think that the switch in directors from Tom Holland to Tommy Lee Wallace did hurt. The humor is different here than in the first with it being more obvious which serves to take the audience away from the horror. Also, the fact that the plot is basically the same with the twist of Charley becoming the “damsel in distress” as the only change. This movie feels more dated than the original with the fashion, hairstyles, and roller-skating vampire while the original avoids that keeping the setting a bit more vague.

Do I recommend Fright Night Part II? I don’t think that this is nearly as good as the first one but that is a high bar so yes, I do. If nothing else, we get to see Roddy McDowell on screen and that alone is worth the price of admission.

Posted by Gutmunchers Lives at 12:15 PM No comments: