Dan Curtis is back on the made for T.V. marathon. This time he is trying to duplicate the magie he had with the Kolchak series by creating another series featuring a writer exploring the unknown. This time it is a man named David Norliss who is writing a book in order to debunk the supernatural. Yeah that is going to work out well for him. 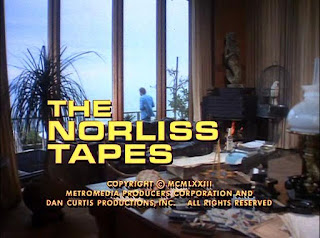 Things get started with Norliss calling his editor to let him know that he hasn’t put a single word onto paper. This is a nice setup for the audience to find out that Norliss has put everything onto cassette tapes. See how the title works in? Anyway, they make plans to speak because the book isn’t turning out as he expected it to. But when the writer doesn’t show his editor eventually gets concerned and goes looking for him. Finding the house empty he pops in tape number one.

The rest of the story is told in a flashback narrated by Norliss. We find out that he was contacted by a recently widowed Ellen Cort in regard to a very terrifying experience that she had. One night she heard a prowler and went to investigate with a shotgun and her rather large dog. The good news is that she finds it was just her husband in his art studio, the bad news is that she is a widow! A shotgun blast and a dead dog later she gets Norliss on the job. What he discovers is a world filled with magic rings and demons made from clay and the blood of innocent victims. Hey wait a minute. That might be why the dead husband is running around killing people!

I’m making light of the plot synopsis not out of sarcasm but because I love The Norliss Tapes. Not as much as Kolchak, but it is a close second. The story has a creepy vibe with the zombiefied husband sneaking around for nefarious purposes only to return to his resting place during the day. This leads to a great sequence where his wife and another woman go looking for him to pull the ring that reanimates him off of his dead finger. Spoiler they don’t get there in time! This is one of a couple great moments where the movie uses shadows to build tension that is then payed off with a decent jump scare. This movie also proved my belief that you leave the damn curtains closed. Hear a noise outside? Ignore it!

Roy Thinnes does a wonderful job in the role and so do the supporting cast. It was awesome to see Angie Dickinson as Ellen Cort, though sadly she isn’t given much more to do other than look pretty and run screaming. The always awesome Vonetta McGee has a small role as the unfortunate woman who meets her end trying to pry the ring off his finger. Finally, Claude Akins shows up as another cranky sheriff. I was about to make a slightly snarky comment about him playing the same role on the Night Stalker but then I looked at his IMDB page. Guess he made a career out of playing the same character over and over again. It’s a living.

The special effects are very simple with our main creature being the zombie husband. They basically use some grey face paint and creepy contacts to create the effect. It works really well, especially the contacts. The way the movie is shot focuses on those eyes and they are genuinely scary looking. There is also a bit with a demon made from clay that is ok but thankfully doesn’t get much screen time.

It isn’t often that you can go back to the well and successfully revisit a formula. But Curtis does that with The Norliss Tapes. Honestly it is Kolchak without Darrin McGavin. It is also a lot of fun and worth spending some time with. The link at the top of the review takes you to YouTube where you can watch it.

The made for T.V. horrors keep on coming. It is surprising that it took this long for me to finally get around to a Bigfoot/Sasquatch movie. The hairy fella was pretty popular in the swinging ‘70s. But I’m getting sidetracked. 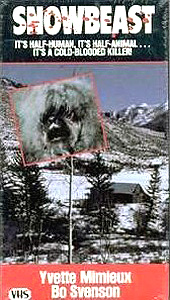 Bo Svenson plays Gar, a former Gold Medal winning skier. He pops in on an old friend, Tony, who runs a resort in the hopes of getting a job and immediately gets one. Though perhaps not what he was expecting. We the audience know from earlier events that something is in the woods and is attacking the guests. After some skiing and snowmobile riding more people get killed by the Snowbeast aka. Bigfoot. But things don’t really get hairy until after the creature shows up at the local Winter Carnival. Ha see what I did there? Hairy like the Sasquatch!

After this Gar, his lady, the sheriff, and Tony decide to head off into the woods to find and kill the creature. They do this by riding around on snowmobiles until it gets dark and then decide to camp out. Basically, using themselves as bait to lure Bigfoot out into the open so they can shoot him. Only when he finally shows up they have somehow forgotten their guns… They really aren’t very good at this. Luckily Tony finds a gun and tosses it to Gar who skis after the monster eventually shooting it and finishing it off with a ski pole.

I’m not going to lie, this is a silly movie. The characters make dumb choices, there are plot holes large enough to drive a truck thru, and it is liberally padded with characters enjoying various winter activities. In no way does it measure up with some of the better movies that I’ve covered on this list. But God help me I still really like it and don’t know why. Maybe it is because the characters decide to part their RV on the road right under a hill that features a nice big pile of logs for the Snowbeast to knock down on them! Or perhaps it is when they run away and leave the unconscious sheriff to be eaten by the Snowbeast. I also love the logic of the movie where they imply the creature is smart and then it immediately lets them run off while it goes after the trapped character. I wasn’t kidding when I mentioned plot holes.

The creature design is decent. It is just a guy in a suit, but they keep it in the shadows and use quick cuts to limit the screen time. When we do see it, they show us a rather creepy and disturbing face. The rest of the time we get “creature vision” with a camera moving thru the woods and grunting to let us know we are looking thru the Snowbeast’s eyes. I sort of liked how they handled the creature. The movie is much better when it is involved, and we aren’t watching skiing and snowmobiling.

I’m not trying to make this movie sound too good. It really isn’t that great. But it does feature one of my favorite bits of dialogue that I’ve heard. Tony is asked to identify a victim and he asks to see her face. The sheriff’s response? “She doesn’t have one.” Heh, good times. If you are in the mood for something cheesy then this is the one for you. If not, you might want to skip it.

Posted by Gutmunchers Lives at 10:05 AM No comments: