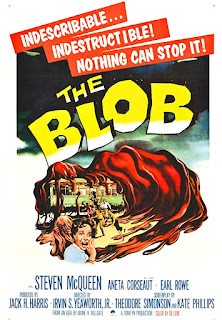 It’s been a while since I did one of my road trip reports for the blog but it is that special time of year. In addition to the upcoming zombie movie marathon in October I’m going to have a lot of screenings and events to write up. While it is still September the fun has already started with the Canton Palace Theater showing a screening of the classic fifties science fiction romp The Blob.

The screening was on Friday so all day at work I was getting more and more amped up. This movie is one of my favorites and I had never seen it on the big screen before. Sure, it was digital and not on film, but there was still going to be an audience of likeminded fans to enjoy it with. The added fun was seeing it in a classic movie theater like the Palace. Seeing a sixty-year-old movie in a venue that was open more than thirty years before it was made is too cool. I was so ready for the day to be over but did the responsible adult thing until quitting time.

You know there is nothing I enjoy more than sharing the fun, so I invited a carload of my friends to come with me. The usual suspects were involved as I drug Sean, Bubbles, and Broud out with me. Bubs hadn’t seen the movie in years and the other two hadn’t seen anything other than snippets over the years. Yeah, I had two Blob virgins with me! That was awesome. I picked them up and piled them in my Nissan for the forty-five-minute drive to Canton. We arrived with plenty of time to spare and grabbed snacks before finding our seats. This allowed us to enjoy the pipe organ music before the show started. The Palace still has its original organ and they play it before the events. Here they even snuck in the catchy and silly theme song to the Blob. Bravo guys that was awesome.

The Blob is a great flick and I’ll write up a review for the actual movie someday for the blog. I’m not going to rehash it here other than to mention that Steve McQueen is awesome, and the creature is legendary. Seriously if you haven’t seen the movie do so this October. It is a perfect flick for Halloween and is family friendly, so it won’t scare the little ones too much. That is all I’ve got to say about it.

As is my habit after the movie we stopped at IHOP. It is on the way back home and I love pancakes after my horror! Though I didn’t actually get them this time, instead going for some bacon and eggs. Why am I talking about food? Well I’m fat and this is my blog, so you get what you get. This is also a chance to kick back and talk about the movie and see what the guys thought. They all enjoyed the flick and the theater. Only Bubbles had been there before when we went to the Twilight Zone Fest, check the write up here. This was a new place to the other two and they enjoyed it. I think I might have created a couple of fans for the Palace Theater. That makes me happy.

We also talked about some of the upcoming events including a killer screening of Night of the Living Dead next month that we are planning on checking out. There is also another Three Stooges fest and Twilight Zone event as well. My Octobers are very busy with conventions, movies, and other spooky stuff but it just isn’t complete without at least one trip to the Canton Palace Theater. If you live in the area you should check out the website at https://www.cantonpalacetheatre.org/movies to keep up with their events.

All in all, this was another fun night at the movies and a great way to kick off my Halloween. If you haven’t realized it yet by reading the blog I’m all about the spooky stuff and this is my favorite time of the year. Time for the next big event… Cinema Wasteland!

Posted by Gutmunchers Lives at 12:34 AM No comments:

Friday means yet another classic genre movie from the fifties. Invaders from Mars is a bit different as it falls more into the science fiction genre than monsters from outer space. There is also an interesting twist that is unlike anything else that I’ve covered so far. More on that later. 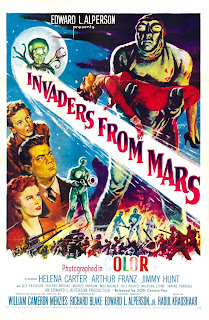 Our main character is a young boy named David. When we first meet him, he is getting up early to check out some cool stuff on his telescope. The kid is a bit of a science nerd and so is his father who is an engineer. When the boy sees a spaceship land in the field behind their house he tells his father, who decides to investigate. When Dad returns he isn’t himself acting almost mechanical and snapping at David. Something is clearly going on. But what?

After a few more people go into the field and return changed David convinces some adults to check it out. They find that an alien ship has landed in the field for a very specific purpose. In a pretty big logical leap, they speculate that the secret rocket program that his Dad is working on is a threat to theoretical alien space ships/stations where the Martians live now that their planet is uninhabitable. They are controlling people like David’s father to sabotage the rocket program and save them from the threat. How do they come to this conclusion? It just sort of happens. The Army shows up and there is a big showdown with the Aliens. How does it end? Not the way you would expect.

Be warned there are some spoilers below. If you don’t like that sort of thing skip to the last paragraph of this review to get my final word and recommendation on Invaders from Mars. Got it? Okay you were warned. The plot here makes some strange leaps in logic, like I’ve already mentioned. But we also have adults that inexplicably believe a kid when he tells them his parents have been kidnapped by Martians and changed. Not only do they believe him, but they call the military and roll the tanks immediately. That was a bit much to take when it came to suspension of disbelief. Instead of accusing the movie of lazy plotting I have to appreciate it for the explanation which comes in the big twist. Here comes the spoiler, this is all a dream that David is having. The paranoia and fear of losing his Mom and Dad along with finding sympathetic adults that will help him out fit nicely into the narrative of his nightmare. Which also explains the lack of logic shown by some of the adults. This is a kid’s dream. Okay movie you get a free pass on that one. 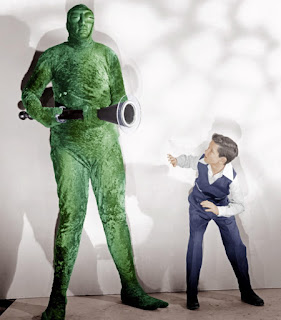 It isn’t just the plot that has a unique point of view. They even do an amazing job with the visuals from the colors used to the spartan sets that have odd angles and doors that are way too large. There is a surreal and dreamlike quality to the movie that is perfect for the story that is being told. Now that being said I will admit that as nicely as it was executed this does come off as a kid’s movie. Because of that doesn’t hold the same interest for me that some of the other better invasion movies do. I found myself more than a little bored waiting for the action to begin. We don’t’ even see a Martian until the last twenty minutes of the movie. And then they are mostly the mutants aka. guys in body suits with the seams visible who keep running thru the same couple of hallways over and over again. The only highlight is the head in a bowl and that doesn’t get enough screen time.

Slow pacing and not enough Aliens make Invaders from Mars a chore to get thru. I do appreciate what they were trying to accomplish, but it just didn’t do it for me. This movie is only for those hardcore fans of fifties science fiction, everyone else should take a pass on it. I know that it is considered a classic by some but I can’t recommended it.

Posted by Gutmunchers Lives at 10:54 AM No comments: