Miss Finney Kills Now and Then by Al Dempsey

I picked up a copy of Paperbacks from Hell and have been reading it. Great source for recommendations if you are into the exploitive books of the seventies and eighties. I recognized this one from the cover of that book and just had to pick it up. I had never heard of Dempsey but figured what the hell.

Miss Finney is an elderly woman being taken care of by her two nieces, Brook and Willa. They wait on her hand and foot keeping the matriarch as comfortable as possible. But then they find out that neither of them is in her will, she is leaving them out in the cold! Willa hatches a plan where they work with a fake psychic named Ives to trick Miss Finney into giving them money. How does the plan work? Well they need to convince her that if she kills that she will be given the life that those people had left in them, making her younger in the process. Because she is too frail to do the deed herself she can be tricked into paying her nieces to do the killing. But of course, the deaths will all be faked.

That would make for a boring book so yes, the bodies do start to pile up as Brook keeps trying to convince herself that it is an elaborate plan that is fooling even her. The odd thing is that it does seem that Miss Finney is getting younger each time they kill. But this was all supposed to be a scam. Though it quickly becomes clear that Brook might be the one being scammed. But will anyone believe her when she tries to tell them what is going on? Of course not! 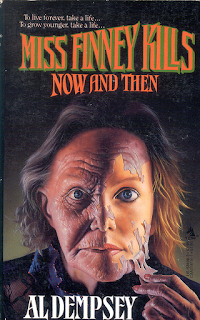 I enjoyed this book. It is a quick read that gets right to the good stuff and doesn’t let up until the last couple pages. For much of the story things make sense in their own odd sort of way. There is a logic to the events and the scheming between Willa and Brook. It is also clear that Willa and Ives have something going on that Brook isn’t privy to. There is some mystery to it all. But towards the end things do get a bit muddied. Miss Finney starts acting like she was in on the thing the whole time, but as a reader we know that she wasn’t. The point where it all changes for her isn’t even included in the book, which makes her attitude at the end strange. There is a huge shift in her personality that we never get to see until it is over. I found that a bit annoying.

But then there are other parts of the story that I enjoyed. It becomes Brook versus everyone else as she is the only one not corrupted by the killings and stealing of life. She tries to get help but is stopped by those that don’t believe her. But then it goes much further than that because the machinations of those around her runs much deeper and involves a lot more people than she realizes. There is a full-blown conspiracy and they want Brook to become part of their little Satanic club. This brings us to a twist ending that has that uniquely “holy crap” moment that a lot of seventies horror liked to spring on the reader and audience. It is a cool twist and an excellent way to end the book.

I’d recommend Miss Finney Kills Now and Then. While I found some issues with the narrative overall this is a solid book and a quick read coming in at only two hundred and fifty-six pages. If you do let me know what you think. Now I need to get onto the next book.

Posted by Gutmunchers Lives at 10:54 AM No comments:

A zombie musical… Okay you have my attention. In addition to being the horror loving nerd that must be obvious to anyone that reads the Horror Dude Blog I also enjoy some musical theater. When I heard that my favorite horror subgenre was mashing up with a musical, I had to see it. Since I live in the middle of nowhere it took a while but that finally happened. I have to say I wasn’t disappointed. 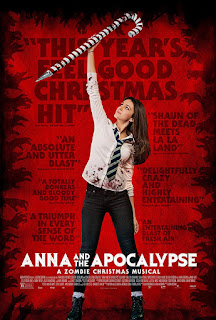 Anna and her friends are typical high school students dealing with all the normal drama of young love, unrequited young love, what to do after graduation, and feeling like they don’t belong. You know the typical stuff. It is Christmas time and the big concert is happening for family and friends, but Anna has to work at the bowling alley with her best friend John. This is important because they weren’t at school with most everyone else. They wake up the next morning and zombies are everywhere! Don’t you hate it when that happens? The rest of the movie is them finding each other and looking for help. Occasionally there is some singing and dancing tossed in for fun.

This movie is awesome. I don’t know what else I can say about it, but I suppose I should try. The cast is excellent and very likeable. The lead, Ella Hunt, is very talented and plays the role of Anna perfectly. This is especially so as the story progresses, and horrible things happen to people she cares about. She makes you feel the character’s pain. The music is catchy enough that I can see myself buying a copy of the soundtrack and replacing the damn Hamilton soundtrack on the next family road trip.

The story is very familiar with the outbreak and survival narrative that fans of the zombie genre will immediately recognize. But the execution is such that the movie never drags as they keep some interesting action or character development on screen at all times. Things can get a bit melodramatic, like when the school bully suddenly has a sad story about killing his father who got bit. But I’m willing to cut them some slack as everything else is so good. Speaking of sad stories, I was surprised by how dark the movie gets. As I said some horrible things happen to the people Anna cares about and in some rather brutal ways. For example, her best friend John obviously has feelings for her, but at one point she makes it really clear that they are just friends. Not long after… well use your imagination. There are several sequences like this in the movie that starts off so bright and cheery. 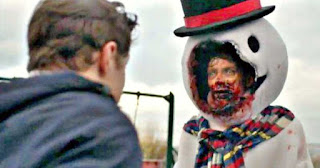 Can’t talk about a zombie movie, even a musical one, without mentioning the gore. First up the zombies look decent. This is early on in the outbreak, so they are pretty fresh looking. The worst we see are a couple legless undead, but not much else. Normally I like a bit more variety in my zombies, but it isn’t unusual in a movie with a smaller budget like this. They do a good job using as much practical work as possible. That includes a couple gut munching scenes and a bite here and there. We do have a bit of CGI mayhem, but it is kept at a minimum.

Most of the time when something gets as much hype as Anna and the Apocalypse did, I’m disappointed. But here the movie does live up to the buzz and I had a blast watching it. I guess if you really hate singing and dancing then this might not be the flick for you, but I still recommend giving it a chance. It might just win you over. My final word is check this one out.

Posted by Gutmunchers Lives at 10:49 AM No comments: