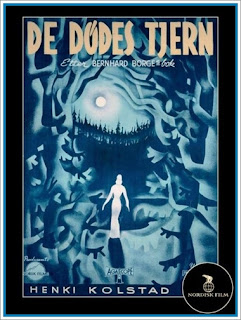 It is again Friday which means time for another fifties movie review. This is my first recommendation from a reader as it was suggested that I might want to track down a copy. This movie is from Norway and deals with subject matter that would have not been dealt with in the US at the time. That is probably why I’ve never seen Lake of the Dead before.

The story opens with a man and his wife discussing the book that he has just finished. He mentions that it deals with the occult and without further explanation we see what I think is a flashback to the pair on a train headed to an isolated cabin with some friends. Along with them is Lillian, whose twin brother Bjorn is who they are all traveling to visit. We get some background about how the twins can sense each other and Lillian even relates a story where she knew her brother was in danger. Then she tells them that he hasn’t been responding to her letters. So, something must be up.

They arrive at the cabin with the help of the local constable, who is a family friend, only to find that Bjorn is missing. Then they hear the ghost story of the lake. It deals with a man who loved his sister so much that he refused to share her with another man. Remember the subject matter I was talking about? He killed himself and still haunts the lake occasionally possessing people to make them throw themselves in the lake. They find Bjorn’s dog dead and his tracks lead to the lake so that seems to be what happened. But is it? The rest of the movie is them trying to figure out the mystery of the lake and what happened to Bjorn. All the time a force seems to seize Lillian calling her to the lake and her death.

There is a lot going on in Lake of the Dead. It teases the audience with the possibility that there are supernatural forces at work, while at the same time giving logical alternatives. This creates some confusion in that you never really know until the end what is going on. In a less well executed movie this would have been annoying but with this one it is the whole reason to watch. I was sucked in and kept changing my mind as to what was going on. What each character said made sense, so I became as conflicted as they were. That is a neat trick and is excellent writing. These characters are fleshed out and the dialogue great. Be warned that there are subtitles, but I wouldn’t have it any other way. This is the kind of movie where you have to pay attention to every word of dialogue, so this works in its favor.

The camera work is incredible. This is one of the most beautifully shot black and white movies that I’ve ever watched. They make great use of the scenery and setting to create the atmosphere of isolation in the otherwise pretty lake. It is so perfect that it feels surreal and this is used as part of the storytelling. I can’t go into much more detail on this without giving things away and I refuse to do that with Lake of the Dead.

This is a very different movie from the others in the Fab fifties series. They have atomic monsters and aliens with the occasional giant bug tossed in for fun. This one is spooky and deals with insanity, hauntings, and dreams in a much more serious way. I’m sure that some fans might find it slow and boring, but to enjoy Lake of the Dead you are required to allow yourself to be drawn into the story and character. Turn off the lights and eliminate distractions because this one deserves your undivided attention. I’m recommend that everyone give this movie a chance.

Posted by Gutmunchers Lives at 10:48 AM