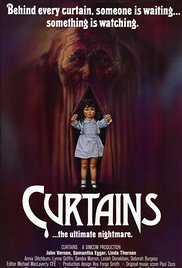 After Edge of the Axe I needed to watch something that restored my faith in cinema as entertainment. Seriously I took a couple days off after Edge of the Axe. It was that bad it killed my desire to watch anything. Not to fear I read a couple of books so I still have reviews to post to the blog. Curtains is a movie that I distinctly remember enjoying and I have a nice new Blu-Ray from Synapse sitting on my shelf. Time to dig in.

The movie opens with a director and an actress working on some lines. He claims that she is too nice and he doesn’t believe her and then the action shifts to a mental hospital. The same director is trying to have the actress committed. Turns out it is for her to do some research for a role. Though she gets a bit too method and is left in the hospital while he tries to recast her part! She breaks out and joins him, as well as six hopeful replacements at an isolated house in the mountains. Well actually only five actresses because we see one die before she ever makes it out of her apartment. The killings continue at the house until our suspect and victim pools are down to only two. Who is the killer?

This is a legit question when watching Curtains. This has to be one of the best written and acted Slasher movies in the entire genre. The dialogue is intense with the director, played by John Vernon, squeezing every kind of emotional response out of his actresses. He does this in between bedding as many of them as possible. His performance, as well as those of the rest of the cast, does much to set the mood for the movie. It is a high stress environment where Vernon’s character is boss and pushes everyone to their emotional limits. It makes perfect sense that someone might snap and start killing everyone.

Time to talk about those kills. Curtains is a Slasher movie that isn’t too concerned with the special effects work. There are eight kills with just a couple on screen. They are tame compared to something like the Burning but still pack a punch. This is because of the execution of the kills. There is much stalking and tension built as the killer and victim creep around the spooky setting of the old house and grounds. The best example of this is towards the end of the movie where one victim is chased thru a prop warehouse. It is surreal with doors that lead to brick walls and cars that aren’t cars. Best of all is how they end it with the anticipated result, but from an unexpected direction.

The look of the killer is fantastic. One of the things you will notice in Curtains are the insecurities of a couple of the actresses over their age and appearance. The killer wears an old hag mask which shoehorns into that theme nicely. It also looks creepy on screen, especially in the ice skating scene where one of the actresses meets her demise.

Curtains is a great movie and one of the best in the Slasher genre. It reminds me a lot of a Giallo with the air of mystery and the black gloved killer running around with a very sharp knife. I love those movies as well. This is a must see.

I think that I’m going to call this particular Slasher movie marathon over. I covered sixteen movies from the subgenre and am getting a bit burned out. Time to mix it up with some creature features or perhaps some demon possession flicks. The choices are endless.


© Copyright 2017 John Shatzer
Posted by Gutmunchers Lives at 9:28 AM No comments: 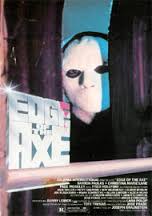 Still off the high of discovering a gem like The Initiation I thought I’d take a shot on a movie that I vaguely remember watching, Edge of the Axe. The description of a masked man killing people with an axe sounds like a simple idea. What are the chances they screw it up? They call this foreshadowing…

The movie starts off in a car wash where a masked man kills a woman with an axe. Then the action moves to Gerald, the bad ass computer nerd who rides a motorcycle. Thru him we are introduced to the rest of the cast, including his love interest Lilian Nebbs and many suspects. Also, we get to see many women killed by a maniac in a white mask, most of whom don’t have names or backstories until after they are killed and some dialogue gives it to them. So who is killing the women and does it have anything to do with the characters who actually have names and dialogue? I guess so?

Edge of the Axe is a Spanish movie that was shot in Mexico for television and the home video market. While it is my understanding that it was shot in English it feels like the writers didn’t speak English as a first language. The dialogue is very awkward and doesn’t have any natural flow to it. This is further complicated by a cast that isn’t good. The delivery varies between stumbling over words to wooden reciting of lines. This doesn’t help an already confusing plot that fails to engage the audience.

We are supposed to have a mystery here. Who is the killer and why are they committing their crimes? For most of the movie there isn’t a connection between the victims. Towards the end one of the characters tosses a line in that most of them worked in a mental hospital. Though not once before that did anyone mention what the characters did or their past. Remember we were lucky to get their damn names. What about the other victims? Why where they killed? Lucky for us one of the characters explains it all, including a backstory for an unnamed body that showed up. This thing is a mess.

The gore in Edge of the Axe is tame but well executed. All the kills involve the axe being used. This is an effect that works well on screen as in most cases we get to see the axe hitting the body. Clearly it is a rubber axe, but thru clever editing and sound effects it seems real enough. A few fingers also get lobbed off along the way for fun. We get a respectable seven kills, but I must discount the only male victim as he technically dies in a car accident. Still six isn’t bad.

I’m not going to recommend Edge of the Axe. The movie is tedious with very little plot and a mystery that never gives the audience a chance to play along. If I’m going to spend my time being teased at least give me some clues to work with. One more thing. Make sure that the stuntman playing the killer is at least close to the size of the character who is supposed to be the killer. Unless of course they magically gain a foot in height and a hundred pounds of muscle. Pass on this one.


Next up in my Slasher movie marathon is Curtains 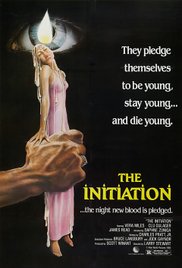 After Death Spa I debated if I should watch something that I know was decent. I didn’t want to string too many disappointments together and bore you the readers. But then I noticed a Blu-Ray in a pile of screeners that I hadn’t watched yet for a movie called the Initiation. After some research, I realized it was a Slasher that I don’t think I’ve ever watched before. That combined with the fact that it is an early appearance of Daphne Zuniga I couldn’t resist rolling the dice.

Zuniga portrays Kelly, a young college co-ed pledging a sorority, who is plagued with horrible nightmares. The nightmares are important because they have a connection with the mayhem that will shortly ensue. Kelly proposes doing a paper on dreams which catches the eye of her TA who is doing his thesis on dreams. As they try to figure out the origin of her dreams she continues with her sorority pledging. At the same time this is happening there is another plot line involving a mental institution and a creepy burnt patient escaping along with some others. This upsets Kelly’s parents so we know it has some connection with her and likely her dream. It all comes to a head when the sorority sisters sneak into a building owned by Kelly’s father as part of their prank night. They are not alone as we watch a killer take them out one by one.

I can’t say much more than that without giving away spoilers and I really don’t want to do that. The Initiation was a surprisingly good entry into the slasher genre. The story is interesting and filled with surprising twists that on a second watch make sense. There are hints that I didn’t see the first time I watched it. Yes, I did go back a couple of days later and watch it a second time before writing this review. That is how much I enjoyed the Initiation! For a Slasher movie the characters are well developed and believable. The cast is amazing with familiar faces Vera Miles and Clu Gulager adding some needed experience to the young ensemble. This is one of those rare entries into the Slasher genre that is interesting even when the killer isn’t adding to their body count.

If you were worried by the above sentence about a lack of gore don’t be. While it isn’t top notch I found the gore and kills in the Initiation to be satisfying. We get a respectable nine kills with many of them on scene. Early on the killer likes to use a garden rake to off his victims including some neck and chest stabbing. But eventually moves onto different weapons like an axe, that ends up in a frat boy’s noggin’ and an archery set that fires an arrow thru an unlucky co-ed. Nothing new or trendsetting here, but overall it is solid gore that paired up with a great script and cast makes for a superior flick.

At this point in my movie nerd life it is very rare that I find an old movie in one of my favorite genres that I’ve not watched. Most of the time when I do find one I’m disappointed and can understand how I missed it. The Initiation gives me hope that there are still some good things for me to find and makes me want to continue to dig thru the garbage to locate them.


© Copyright 2017 John Shatzer
Posted by Gutmunchers Lives at 9:41 AM No comments: