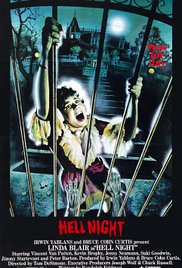 Well after Sorority House Massacre I needed to watch something that restored my faith in the Slasher genre. Hell Night also features college kids, but this time they and the plot aren’t as stupid. Plus, we get to see a grown-up Linda Blair running from a crazy killer!

Hell Night is when all the pledges get hazed before getting accepted to the various sororities and fraternities that they are joining. Yes, back in the ‘80s you could still haze people though many times it ended up with a body count… Probably good they stopped doing it. Anyway, two men and two ladies (including Linda Blair’s character) get locked in a creepy mansion with a history of murder. Seems a father killed his family of mentally challenged children years before. After three of the upper classmen sneak back into the house to scare the pledges things get rolling. There is a killer on the grounds that begins to pick them off one at a time in gruesome ways. Good times ensue.

Where to start with Hell Night? To start the pacing of the movie is great. It spends a few minutes introducing the characters and getting them to the house. Once the characters are there the killing doesn’t start right away, but instead they wander around in the dark with the occasional jump scares and pranks by the older students. This sets the mood for the rest of the movie which brings me to my next point. The movie has some jump scares as well as the creepy vibe that makes it an interesting watch. Even after seeing it dozens of times and knowing what is coming I’m still sucked in. Not only do they wander around a spooky house but there is also a hedge maze. Growing up in the Midwest where we have corn mazes this has always grabbed me. Seriously those things are scary as hell!

The body count is a bit light with only six kills. But the first three of those kills are onscreen and excellent. You get a co-ed losing her head, a frat boy’s neck getting twisted, and another frat boy skewered on a scythe! Again these all happen in plain view of the audience and look great on screen. Two of the last three kills happen offscreen but I’m okay with that because you are left in doubt as to what happened and if they are actually dead. I was very satisfied with Hell Night’s gore.

I’ve never understood why this movie wasn’t more popular with fans. Good gore, excellent pacing, and a wonderful setting make for a fun movie. Hell, I didn’t even mention how well the movie is written. If you pay close attention the movie slips a lot of clues into the dialogue including the big twist at the end. Hardly anyone notices it on the first viewing. Even I don’t expect that level of writing in a Slasher movie and I love the damn things. This movie is highly recommended!

Next up in my Slasher movie marathon is The Mutilator

© Copyright 2017 John Shatzer
Posted by Gutmunchers Lives at 8:44 AM