Another Saturday night meant another road trip to my friend Eric’s backyard cinema. This time around he was showing a double feature of gritty shot in New York low budget flicks. The evening started off with Slime City and ended with Street Trash. You know these events just keep getting better and better.

Unlike last time I wasn’t flying solo so before I left town I picked up a couple of friends. The three of use headed out to Eric’s place a bit early for supper and to stock up on snacks. One must have Milk Duds to properly enjoy cinematic mayhem! Once we arrived and set up our chairs there were still a few minutes to shoot the breeze and talk about movies. Though no one spoiled Street Trash for my friends since they were both still “virgins” to the awesomeness that is the Viper fueled wackiness. But before we get to that we had some Slime City to watch. 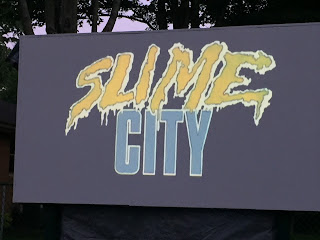 If you haven’t seen Slime City you really should. It is the classic boy loves girl, boy gets new apartment, boy unknowingly becomes the vessel for a reincarnated alchemist and begins murdering people story. It was shot with a micro budget in New York but don’t hold that against the movie. Director/writer Greg Lamberson puts every penny on the screen and the movie looks like it had a much bigger budget. The locations used give the movie a very gritty feel that only seems to have been captured by anything shot in the city in the ’70s and ‘80s. There are a few funny moments and some decent gore considering the limited resources. I also learned one very important lesson from Slime City, never forget your boom box! If you get the chance you should check it out. 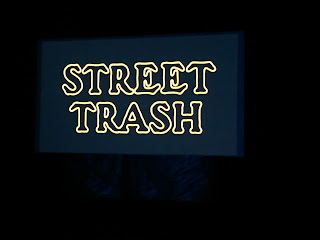 Next up was Street Trash. This movie is almost impossible to describe as it is basically an hour and forty minutes of insanity on the screen. You have a storyline with a couple of brothers living in a salvage yard, one of whom is inexplicably attractive to a pretty lady. There is a crazy Vietnam vet having flashbacks and killing random people. A case of booze called Viper that melts/explodes anyone who drinks it. Though the best and most memorable bit about the movie is an interesting game of keep away! All the stories are linked by the fact that most of the characters are homeless and/or scumbags. Thus the title of Street Trash.

I know that I finish each of these articles talking about keeping the experience of watching movies with an audience alive. This double feature is a particularly good example of the point I’m trying to make. Neither of the guys that came with me had seen Slime City or Street Trash before Saturday night. These are very odd movies and I love watching other people react to them, especially Street Trash which is a constant stream of crazy. It is also cool that they got to react and have their first viewing with a bunch of fans. Sharing the laughs at some of the “Holy Shit did they just do that” moments is what I’m always to create and thanks to Eric it happened. Seeing Street Trash for the first time is always memorable, but now they get the added bonus of watching it under the stars and with an audience that was into it.
As always if you are inspired to do something cool like this yourselves send me an email and let me know. If you happen to live in the Canton Ohio area and are interested in attending a Dead End Cinema event check out the link below to the Facebook Group. I can’t wait to see what is planned for the next event.
Dead End Cinema https://www.facebook.com/groups/1653008301605789/?ref=bookmarks

© Copyright 2017 John Shatzer
Posted by Gutmunchers Lives at 9:40 AM