Digging into the archives again for another book review. I wrote this review for my old website. It doesn’t fit in with my novelization series because Matheson wrote the book and then the screenplay a couple of years later. But I love both the book and movie so much that I had to add this to the Horror Dude Blog. 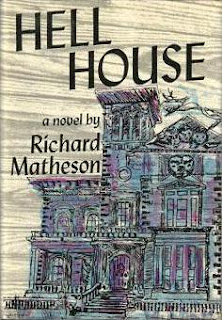 Let me just start off by saying that I’m a huge fan of Matheson’s work. I think that the guy was a great author and he wrote some great scripts (even adapting some of his own work for the big screen). Hell House was one of the first books of his that I read and I find myself going back to it every few years for another read.

A wealthy dying man hires a scientist to prove or disprove life after death. Since time is of the essence he purchases the legendary Belasco house, which is also known as Hell House. This is known as one of the most haunted places in the world. He then sends a scientist and some psychics to the house to conduct research using both scientific as well as supernatural means. Among them is the only survivor of the last attempt to investigate the house, a man named Fischer.

Things begin to happen almost as soon as they arrive. The scientist, Barrett, ignores much of them, thinking that it is the raw power of the house being influenced by the psychics. He has a machine that he thinks can clear the house of the malignant energy that is trapped within it. All the time Fischer tries to explain that there is some intelligence to the haunting and that they should just let the house alone. To this end he keeps himself shut off from his own psychic abilities. But who is right? Bad things happen and some secrets are revealed before Hell House is done with them.

This is one of the best haunted house novels that I’ve ever read. Heck I’ll go further and say that this is hands down the best that I’ve ever read! The story is quick to get to the good stuff.  There are a couple of twists and turns before you get to the end, which itself is very satisfying. I don’t want to ruin this, so I’m keeping my review as vague as possible. I will say that I love the reveal at the end of the book. Along the way we get to see the house work all of it’s perversions on those unlucky enough to spend their nights behind it’s walls. There is some pretty twisted stuff, including one of the most unpleasant ways for a ghost to possess someone that I’ve ever seen portrayed or read in a book. Don’t let the fact that this is an older novel fool you into thinking that there isn’t some nasty stuff going on. It isn’t as explicit as some newer books, but it is there.

In addition to the plot much of what drives the fun are the characters and how Matheson develops them over the course of the book. Barrett and his wife are interesting as we see their marriage has some issues that the house uses against them. This leads to some pretty nasty emotional and physical consequences. Physically Barrett is the target of much of the abuse handed out by Hell House as if the house is using his wife’s frustration as inspiration. Then again, the Florence character (the other psychic) has some bad things done to her as well. Mostly to take advantage of and corrupt her innocence. But the abuse that these characters take only carries any impact because as a reader I really liked them and wanted things to be okay. This is because they are so well written that I related to and felt like they were real people. Can there be any better sign to the talent of an author then this?

If you haven’t had the pleasure of reading Matheson’s work you should rectify that, and there isn’t a better place to start then Hell House. Thankfully his work is easy to find, and copies of this book are out there to be had.