Another Throwback Thursday for you my faithful readers... both of you! I dug into the archives and pulled out this review that I did for a magazine that does reprints of the old Doc Savage Pulp stories. I honestly don't remember who or what I wrote this for so the blog seems like a good place for it.

This is a bit different review for me.  I’ve always been a big fan of the old pulp novels of the 1930s and especially fond of the Doc Savage character. When I found that a company called Nostalgia Ventures had started reprinting some of the stories that appeared in the old magazines and novellas I had to get my hands on a couple to check out. 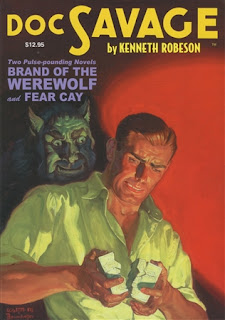 Volume 13 reprints a couple Doc Savage stories. The first one is Brand of the Werewolf. This story finds Doc Savage and his friends heading to Canada to visit one of the few living members of Doc’s family. But on the train trip to the remote location attempts are made on the lives of Savage’s companions and he is framed for killing the conductor! These are merely roadblocks trying to keep Savage from making it to his vacation. Unbeknownst to him some criminals are up to no good near his cousin’s cabin and will do anything to prevent his arrival. This includes murdering anyone that gets in their way. Eventually Doc and his men arrive and unravel a mystery that involves some buried treasure.

The second story in the book is called Fear Cay. This one finds Doc being attacked on the streets of New York by some criminals. Savage is too clever for them and soon gets away, but not before figuring out that some larger organization had hired them to assassinate him. It might have something to do with the person trying to reach him regarding a mysterious organization called Fountain of Youth, Inc. Before you know it they are flying off to the keys off Florida in search of a mysterious island that may or may not hold the secret of eternal youth. Toss in some flesh-eating ants, lots of gunplay, and a 130-year-old man and you are in for some fun.

I really enjoyed both of these stories. There is just something that I really enjoy about these old adventure stories that make them unlike anything being done today. Perhaps it is nostalgia, but they are fun. I will say that the dialogue, language, and general writing style might be a bit much for a new reader. But stick with it and once you get used to it the stories flow nicely. These old pulp adventures are a blast and inspired so many of today’s biggest movies/characters that it is worth checking them out.

Volume 13 also includes a nice write up connection the stories (they both feature Doc Savage’s female cousin Pat), as well as a cool bit about the radio adaptation of Fear Cay in the 1980s by NPR. There is also a small one-page autobiography about the writer responsible for both stories, Lester Dent. So not only do you get some great stories, but you get to learn a bit about the character of Doc Savage and the history behind the stories. I will warn you that these pulp stories can be an acquired taste, but if you have read them before or want to try them then I do recommend checking out Volume 13 of Doc Savage.  For more information on this on the other nifty products from Nostalgia Ventures head over to http://www.radioarchives.com/

Posted by Gutmunchers Lives at 10:49 AM