It is time that I again dig up an old favorite for the made for T.V. marathon. This time around we check out the movie that won legendary effects wizard Stan Winston his first award. He won an Emmy for his work in this made for television flick. I believe that this was made for CBS, though I haven’t found confirmation of that. Time to check out what the Devil’s minions are up to. 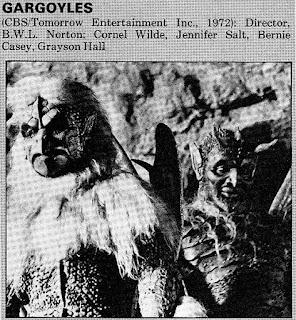 A professor, Dr. Boley, who studies the occult (mostly to debunk it and sell books) is in Arizona on a trip to study legends from the region. His daughter joins him, and together they drive out to meet an old man who says he has made an incredible discovery, which turns out to be the skeleton of some unnatural winged creature. At first Boley is dismissive, but after the building is attacked, the old man killed, and his car is disabled he suspects that something strange is going on.

Thru a voiceover at the beginning of the movie the audience knows that the devil made his own race of creatures to fight for dominance of the Earth with man. They are the gargoyles and every six hundred years the eggs hatch. It seems that the time has come and the Gargoyles have begun to hatch in the Arizona desert. They are trying to remain hidden until their numbers are great enough to attack the human race, which is why they came looking for the skeleton. It is up to Dr. Boley and the residents of the local small town to do battle with the Demons.

This is one of those movies that I remember watching on the late night creature feature shows when I was growing up. It used to scare the crap out of me, and while it isn’t as scary to a forty plus year old me as it was to a seven-year-old me I still enjoy it. The story is a creepy take on the whole fall of Lucifer and his hatred of mankind. That and there are a few scenes that are downright disturbing. The monsters aren’t cookie cutter bad guys and on some level are sympathetic. You see them care for their young and when one of them is dying after being hit by a truck it is sad. Of course, they do want to get the numbers to at least enslave all of humanity if not murder us. But hey no one is perfect!

One of the things that has always stuck with me about this movie is what they discover in the desert when out looking for the Gargoyles. There is something about the scene where they find the truck driving in circles and you realize that they are all alone without help coming that still sends a chill down my spine. If you think about it that means the Gargoyles have figured out what the humans are up to and left the bloody vehicle in their path to either scare them off or just mess with them. This is one of those scenes that has burned itself into my psyche and probably contributed to my love for all things horror.

What most everyone remembers about this movie is the look of the creatures. The lead Gargoyle, who gets most of the screen time, looks incredibly cool. They didn’t have much of a budget being that this is a television movie, and I’m still amazed by how well the Gargoyles turned out. In addition to the lead some of the others look pretty good as well, though there are a few that they keep way in the back that are a bit weak (ala the later Planet of the Apes movies). Still this is impressive feat for such a production to pull off. Then again is it any wonder since this is an early effort by Stan Winston that it turned out so well? This was the first major award he won since Gargoyles won an Emmy for the makeup.

This is one of the best made for T.V. horror movies you will catch. It also features the most elaborate and well executed creature effects that you will see from a network production. Maybe Salem’s Lot could match Gargoyles but even then, I’m not sure. As with many of the other movies that I’ve covered for this marathon the above link will take you to a copy of the movie on YouTube. I recommend checking it out.

Posted by Gutmunchers Lives at 10:21 AM