Night of the Crabs by Guy N. Smith

This book kicks off with a young couple heading out to the ocean for a romantic swim to end their holiday. That turns out to have been a bad idea since they choose the very moment that giant killer crabs have invaded the Welsh coast. The pair run into and are quickly made a meal of by the creatures. Though at the time no one realizes it. It isn’t until Cliff Davenport shows up to investigate the disappearance of his nephew that things become interesting. With the help of Pat, a lady friend he meets and becomes very friendly with right away, Cliff tries to get help.

Luckily, he knows people in the military and soon they are on the scene. This leads to several encounters where they find out that bullets, fire, and even tanks can’t stop the monsters! Hell, they even try and bury them alive, but the crustacean menace isn’t going to be killed that easily! Do they stop them? If so what finally does the trick? Well I’m not going to ruin it here in my review. I mean you might actually want to read Night of the Crabs. 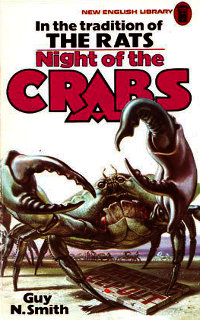 I say you might want to read this one for one very important reason. If you are looking for a serious horror novel that is filled with clever twists and turns, then this isn’t for you. Night of the Crabs is a very straightforward and simple outing in the genre of creature feature. The best way that I can describe this book is that it feels very much like a cheesy drive-in movie. Characters are introduced. Some of them die quickly in horrible ways and some become heroes that immediately bed the beautiful ladies. Okay just Cliff falls into that latter category, but you know what I’m talking about here. The army guys are dumb and arrogant but get their act together and eventually help the hero kill off the crabs.

This is basically every monster movie that I watched from the fifties. I know that my review of the book is sounding negative, but I don’t mean it that way. See I love these movies and this kind of story. It is easily digested (pun not intended!) and is what I consider to be “brain candy”. That is something that you can enjoy without thinking too hard about it. The writing from Smith isn’t classic but is passable. The kills are a bit repetitive, but the author doesn’t shy away from describing the bloody deaths in great detail. As a gore hound I appreciate that. I wasn’t thrilled with his need to keep revisiting Cliff and Pat getting busy as it got in the way of the creature mayhem. Then again that might just be me and my desire for more monsters in my monster stories!

Overall, I think that this is worth checking out. I was in the mood for something simple and silly and Night of the Crabs was perfect. I also see that there are another seven books in the series, so I’ll have something to read when I’m in the mood for some more killer crustaceans. The actual paperbacks can be a pain to track down but getting them for the Kindle is a snap. Yeah, I know digital is the devil, but at least I got to read the book!

Posted by Gutmunchers Lives at 11:03 AM