note: I couldn't find a trailer but I did find the opening credits where you can hear the "awesome" theme song. Variations of the song play over all the kills. More on that later in the review. 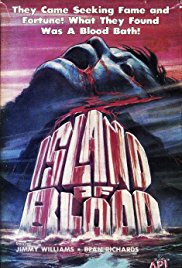 The Slasher movie marathon continues as I dig deep into the early days and check out Island of Blood. This is actually a new one for me that I somehow never rented from the video store. It has an interesting premise with a group of people headed off to an island to shoot a movie. Sounds a little bit like Curtains, which I dug. Could I be this lucky to have found another hidden gem? Let’s find out.

After we see a woman shot and killed while swimming we meet up with our cast. They are an odd group of actors and crew headed out to an island to shoot a movie before the valuable real estate is given to a church for a camp or something. So in a way Island of Blood does take place at a summer camp! Okay maybe not. The fact that the place is being donated is done to the dismay of the mayor who wants to develop it. This is used to make him a potential suspect in the killings since as he says himself, “who would want it for a church camp with all these deaths…” Though this is rather pointless since we know who the killer is early on.

It takes some time to get rolling, but when it does we get a series of killings. The murderer has this gimmick where they play the same song on cassette (hey it was the eighties!) with the words changed so that they match the deaths. It becomes a very predictable line up the victims and kill them off one at a time. I wish that there were more that I could say but the plot is simple, almost too simple. Which leads me to my first issue with the movie.

This plot lacks something… well really anything. Nothing happens in this movie that is at all interesting or engaging for the audience. They make the smallest effort to explain why everyone is on the island and that is about it. The killer is revealed way too early and not given any reason for why he is killing these particular people. I mean he is a frustrated rock musician that realizes his dreams aren’t going to come true. This is why the songs are a big deal and why they match the killings. But why a movie crew? None of these people have anything to do with his career failing. Would it have killed them to rewrite the script so that it was a band rehearsing or recording a new album? You know so that the killer had some connection to the story?

Okay then I guess that would have eliminated the really awful attempt at a twist ending. Spoiler the movie’s producer somehow manipulated the situation so that he could shoot a snuff film. The killer wasn’t in on it, the producer just knew that he would go nuts and kill everyone and had the ability to setup the cameras so they could catch it. This movie makes zero sense! How do you screw up a Slasher movie?

We do get nine kills in Island of Blood. A chainsaw, nail gun, acid, and spear are all involved, but don’t get too excited. The kills are very tame, and many happen off screen. This is before the censors hacked away at the genre, pun intended, so there isn’t an excuse for lame deaths. Again, I wish that there were more that I could say about it, but Island of Death is just a waste of time. I recommend skipping this one.

Posted by Gutmunchers Lives at 10:07 AM