Night of the Claw by Ramsey Campbell

Okay first thing you might notice is that the cover has the name of the author as Jay Ramsay. Ramsey Campbell wrote this book under a pseudonym. I’ve not been able to find out why he did that, but I thought that I’d clear up any confusion before we proceed. Never let it be said that the Horror Dude Blog was confusing… at least not on purpose.

Alan is a successful author who is in Africa researching his next book. On his way back to England he agrees to take a package back for an acquaintance. That was a huge mistake since in it was a totem of the Leopard Men. They were a secret society of cannibalistic assassins with supernatural origins. Before he knows it Alan is falling under the influence of the totem and finds himself becoming violent towards his young daughter Anna. The reason for this is because to join the Leopard Men, one had to kill and eat their eldest daughter. This is what he is being compelled to do. To stop this Alan returns to Africa to try and break the curse!

Hey since he is on a different continent Anna should be safe, right? Well not actually. Before he leaves the Claw is stolen. That means it and its influence stays back in Merry Old England. Anna’s mother, Liz, starts to fall down the same rabbit hole that Alan did. While he is off trying to break the curse and return to his family they are still in danger. The rest of the book is Alan searching Africa for answers and Liz getting more homicidal towards Anna. 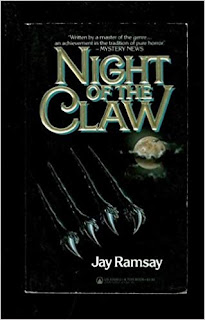 This is a mediocre book. There are portions that I really liked and others that I had a great deal of difficulty getting thru. When the book is at its best is when we see the story thru the eyes of Alan and Liz. Alan’s search in Africa trying to track down the Leopard Men and break the curse is really good. This is by far when the story is most interesting. Campbell also does a wonderful job capturing Liz’s descent into madness as she gets more paranoid and starts to blame little Anna for everything that has gone wrong. I enjoyed that part of the book as well.

Sadly, as much as I liked the parts with Liz ‘s madness and Alan’s search in Africa a good third of the book is told from the perspective of Anna. We get chapter after chapter of her wondering why mummy is being so mean to her. Or blaming herself for daddy leaving. It really isn’t that interesting that she likes to paint rocks and shells or write stories about the goats. I found myself so frustrated with Night of the Claw because every time I was getting into the story we ended up with a chapter from Anna’s point of view. This wrecks any momentum that it had picked up and kills the mood. I found it very difficult to get thru this one.

I have a pile of Ramsey Campbell books on my to read shelf. Night of the Claw hasn’t made me want to avoid them which is a good thing. I’m hoping that his other work will be more focused on the better bits. They can’t all have kids in them, can they? Regardless I wouldn’t recommend Night of the Claw.