I read this one when it first came out and remember enjoying it. With the movie adaptation out, I thought that I would go back and revisit the book. I couldn’t find my old copy, so I ended up purchasing the expanded and revised edition where the author went back and added a prequel and tweaked the original book to make it fit better with those that followed. Time for some prehistoric shark action.

The protagonist of the book is Jonas Taylor, a submersible pilot, who has a terrible accident while taking some scientists to the Mariana Trench. He claims that something attacked them, but no one believes him and he gets discharged from the Navy. He goes back to school and spends the next few years trying to prove the existence of Megalodon, an enormous shark that science claims are extinct. When another accident happens, Jonas finds himself diving into the deep again hoping to vindicate himself and prove to everyone that he saw something terrible all those years ago. This time not only does Jonas see the shark, but it follows them to the surface. The rest of the book is them trying to either destroy or capture the beast before it eats too many people.

I still really like this book. The plot is solid and plays out like an old school monster movie. You have the witness that no one believes and some scientists that push their luck making a series of decisions tempting fate until something horrible happens. Here thought they are trying to do good with some underwater seismic devices to predict earthquakes, so it isn’t the normal “playing God” complex. The creature shows up and starts eating people many of whom deserve it! Seriously Jonas’ wife is a creep and the navy guys that screwed over his career to cover their butts… well I wasn’t sorry to see them go. Alten does a great job creating villains and is very clever in making them humans and not the shark. The shark is just doing what the shark does. It’s the people that are really interesting. 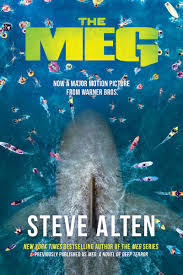 The pacing of the story is tight. Alten does give us some character development, but also knows to keep the action coming. When someone sits down to read a book like Meg, they want a giant shark eating people and that is what he gives us. But the author also realizes that for it to be a good story we need to care about the characters. This is tough to pull off, but I found myself rooting for Jonas.

Giant prehistoric shark swimming around means some bad things are going to happen to people. While the death sequences don’t linger on the blood and guts, we do get some fun kills. People get bit in half, lose their legs, get digested, and in one case “pops” when their submersible gets cracked open at depth. This is a gooey book and I appreciated that.

The Meg is an excellent book and a fun read. The ending clearly was set up to continue the story and Alten has written at least five more books in this series. I never picked up any of them up but am going to have to track them down. Consider the Meg recommended. If you were wondering this is also the classic situation where the book is way better than the movie.

Posted by Gutmunchers Lives at 10:18 AM