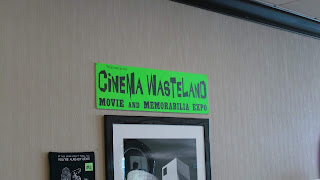 I seriously needed my biannual Cinema Wasteland break from real life. Not going to get into any gory and unneeded details other than to say that life has been kicking my butt. Spending a weekend with friends talking movies and partaking of adult beverages was just what the doctor ordered… minus the booze and spicy foods probably. We just won’t tell him about that.

The show starts on Friday, but I always try and do something fun to get myself in the mood. Normally that means watching a bunch of old drive-in or horror movies. This time was a bit different since Samantha Mathis was one of the guests and I wanted to watch something from her career. I had a couple of choices; my favorites are Pump up the Volume and Broken Arrow and chose to go with some old school John Woo action. I didn’t stay up too late as I had lunch plans the following Friday, so it ended up being just the one movie.

Friday arrived and after packing I headed up to the hotel. It was too early to check in, but that was okay since I was meeting Eric and Angie for some lunch. You guys might remember them as the hosts of Dead End Cinema which I’ve written about many times here at the Horror Dude Blog. We went out for some decent sub sandwiches and headed off to the grocery store for supplies. A good idea when hitting up a convention is to bring your own snacks and drinks. It is way cheaper and helps you save money for the dealer’s room. After meeting up with my roommate for the weekend, Brett, it was time for the show to open and the fun to start.

My first run thru the dealer’s room had me picking up some movies from out of print Dan. We are going to be doing some eighties teen comedies for the Bloodbath and Boomsticks podcast and those things are hard to track down. But now I have copies of GORP and Splitz to watch and review there. I also got a “bucket” list movie that I’ve been wanting to watch for years called Skatetown U.S.A. which was awesome. Not the movie per se, but the fact that I actually own a copy now is awesome. There is a whole story about that which I’m not going to go into detail here but am saving for a future issue of Midnight Magazine. I also stopped in and saw 42nd Street Pete to pick up my copy of Grindhouse Purgatory as well as a John Wayne movie that I’ve always wanted a copy of. Overall it was a good first day for purchases.

After the dealer’s room closed a group of us met up and ordered a pizza. Eating and shooting the breeze with my Wasteland friends is one of the reasons that I love going to the show. The only screening on Friday that I was interested in was Predator. They were showing it on 16 mm film and with the added bonus of a Wasteland crowd it became a must see. It didn’t disappoint as the movie was as awesome as always and the crowd was really into it. Plus hearing the audience’s reaction to the funny lines and the horribly un PC jokes was fun. This was the perfect way to end day one.

I took my time Saturday morning so ended up only catching the end of Hangover theater. This year they played the amusing Monster on Campus, which I’ve reviewed for the blog.  You can check that out by clicking here. Immediately after that it was time for my favorite ninety minutes of the weekend, the Three Stooges hosted by the Son of Ghoul. We got a Shemp short and a Curly short this time around. As an added bonus he edited down another longer movie to show the basic story with only the Stooges routines. There was some familiar stuff, but it included a few bits I’d never seen before. That was awesome.

Saturday was also the day that my friends Dustin and International man of mystery Bubbles showed up. This was Bubbles first Wasteland and they managed to catch the Stooges. Afterwards we chatted and hit the dealer’s room. Since I hadn’t gotten my one autograph of the weekend, it was going to be a light show for that, and I had a couple willing cameramen it was time to meet Samantha Mathis. She was very cool and charging a reasonable price. I picked out a picture from Broken Arrow for her to sign and well that was pretty much it. She seemed to be having a good time and I hope that she made a lot of money. Though I’m worried that she was maybe not in the wheelhouse of a lot of Wasteland fans.

I did some more shopping and upgraded a couple movies to Blu-Ray releases with some neat special features. There isn’t much that I haven’t seen or feel the need to add to my collection anymore. I find myself upgrading to Blu-Rays that have some extras that I’ve not seen before and might add to my appreciation of a flick that I already like. The days of the long list of must-see movies is really over. It was bound to happen if you watch as much crap as I do. After dropping off my purchases in the room it was time to check out the I Drink Your Blood guest panel. 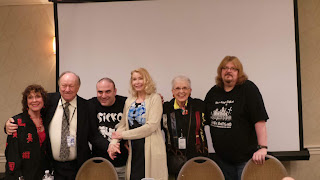 Only Cinema Wasteland would do a reunion show featuring the remaining cast members of such a weird movie. I love I Drink Your Blood as it is one of my favorite drive-in movies. If you haven’t seen it, I’ll just give you a brief spoiler free recap. Hippies are jerks and beat up and old guy, his grandson finds the body of a rabid dog and injects the blood into some meat pies. The hippies eat the pies and get rabies. Hilarity ensues! Seeing the cast members from the movie on the stage talking about shooting the movie and working with director David Durston was a once in a lifetime thing for a fan like me. Having talked to David several times before he passed away, I knew most of the stories, but it was still a blast.

After the dealer’s room closed on Saturday we headed out to a local sports bar for some grub and then back to the hotel to hang out and shoot the breeze. If I can give another piece of convention advice it is to make sure you make smart food decisions. I decided to try a BBQ Chicken Parm meal, which seemed like a good idea at the time. It was not. While I still had a decent time, I was starting to feel a bit bad. By Sunday morning I was hurting.

I managed one more walk thru the dealer’s room where I picked up some comics from Dirk Manning. He has some great horror/Lovecraft themed stuff that I had never noticed before. Saturday night when I couldn’t sleep, I read the one that I bought Saturday and ended up going back and buying the rest before I went home on Sunday. Seriously if you like horror you need to check out his books. I’m including a link so you can track down his appearances and/or purchase his comics. He can be found at http://www.dirkmanning.com/

I didn’t end up sticking around and watching anything on Sunday because of how I was feeling. Good news is that I got over that just in time to come down with a nasty “summer” cold which is why this wasn’t posted earlier. It was a rough week. I had a great time at the show and recommend that anyone who hasn’t had the chance to hit up Cinema Wasteland take the time. If you do so email me and let me know you are and we can hang out. The next show is shaping up to be another good time with the main event being a Martin reunion. I’m not a huge fan of that movie, but it is a Romero flick so that is always a welcome bit of nostalgia. Check out https://cinemawasteland.com/ for more details on who is attending.

Posted by Gutmunchers Lives at 4:10 PM