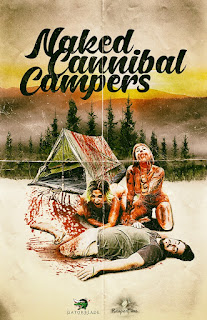 The movie kicks off with a lady running for her life thru the woods. She reaches a cabin with three scantily dressed ladies in it. They let her in and she tells them that a crazy person stabbed and killed her boyfriend. They offer her some tea to calm down, but it is a trap! When next we see her, she is unconscious, and the ladies are now naked and eating her guts. Well, that is how you start a movie I suppose…

Now we meet our main characters of Scott, Dale, and Rick. These three dudes are heading off on a fishing trip. They end up meeting the three ladies and soon are invited to supper. Though I don’t think they were expecting to be on the menu! The three naked witches who camp and eat people, see where the title came from, soon are faced with a mysterious man in an eye patch and the dead boyfriend who was brought back to life with some Mr. Miyagi style healing shit. The mysterious man is a warlock ready to do battle with his magic and he “Yoda” trains the now not dead anymore boyfriend in the ways of magic. Then they grab some guns and shoot them down… because I suppose the magic didn’t matter.

This is clearly not a movie that was meant to be taken seriously at all and I can appreciate that. There are some funny lines like “Witches get stitches” and when given a pill “You aren’t going to Cosby me, are you?” that do land. I honestly had a couple of laughs, but that doesn’t make up for the awful pacing. This feels like a long movie, and it is only sixty two minutes long! We get extended training montages (again never used the magic), a couple naked girls in the shower cleaning off blood scenes, needless dialogue that feels improvised, an extended driving sequence, and several naked rituals with chanting.

Okay that last one wasn’t so bad… but I think you can see where I’m going with this. They obviously didn’t have enough of a fleshed out script in place before running off to the woods to make their movie. Would it have killed them to spend a few extra weeks adding in some more plot and a few more jokes? I mean what they did have was decent enough, so I know that was possible. I’ll continue to point out when reviewing low budget movies like this that you need to spend time prepping before grabbing your camera. 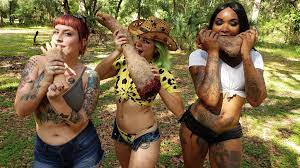 Some other things to note was the occasional use of intrusive and obnoxious generic metal music that honestly doesn’t fit the scenes. Though again that was mitigated by the public domain tunes that are less annoying and fit the scenes better. Also, they make a big deal that Jill Whitlow, who most of us know from Night of the Creeps, appears. But be aware this is “stunt casting” as she is the lady running thru the woods and is in the movie for all of three or four minutes.

The kills are okay for a low or no budget movie. There is a clever to the face that was cool, and they do the old “legs in a hole” gag when poor Scott is eaten from the bottom up. Though again they sort of ruin things with the odd gunfight at the end which is done with bad CGI blood effects. It again feels like they ran out of steam or sort of half assed it with the ending.

Naked Cannibal Campers could have been a fun movie had they put just a bit more effort into the script. As it is I can’t recommend it. The movie has far too many flaws, the biggest being that for an hour long movie it is far too boring.