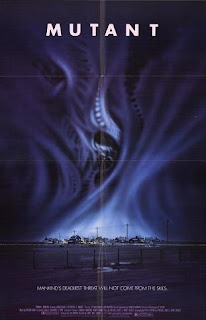 Brothers Josh and Mike are on a bonding trip in their sweet convertible Camaro. Sadly, they crash the car, seriously it is a sweet ride, and end up stranded in a small town. The first night Mike turns up missing and Josh is desperate to find him. While looking for Mike he meets the local school teacher, a pretty lady named Holly, and they hit it off. Sort of strange to be hitting on a lady when your brother is missing but she is cute. They eventually figure out that an evil chemical company has been dumping hazardous materials nearby and it has turned some of the locals into mutants that feed on blood! There is much running and screaming by the ever-shrinking cast until the satisfying and predictable ending occurs.

This is a movie that I remember renting from the video store. The cover of the tape promised a creature feature but what we really got was kind of a zombie movie and a pretty good one. The basis for the story is the basic stranger in town scenario. Of course, the two brothers immediately cause issues with the local redneck jerk. He causes the car to crash and then starts some shit with the brothers at the only bar in town. You also have the local girl who becomes the love interest of one of the outsiders. Heck you even get the sheriff (authority figure) with a drinking problem caused by a sad backstory. If you have watched many horror movies this should all sound familiar. Lucky for us we get some twists.

Spoilers are coming, you have been warned. The relationships between some of the characters is surprisingly well written. The movie takes time to make sure the audience knows that the brothers care about each other. So, when Mike dies, even though it is obviously going to happen, it is still sort of sad. The fact we get to see it before Josh goes looking for him adds some depth to the story because we know what he is going to find. There is also a deeper relationship hinted at between the sheriff and the “lady” doctor of the small town. When she also dies, partially because he let her examine a body, it tears him up. Finally, there is the kid in danger that you get in many horror films. Here it is a student in Holly’s class that she risks her life to save. Well they kill him and not in a nice way! Yeah, the kid dies. This might not seem like such a taboo today or in the movies coming out of Europe in the ‘70s and ‘80s, but it is shocking to see it in a low budget made in America horror flick.

I should also mention a couple members of the cast. Wings Hauser is decent as the older brother Josh and the legendary Bo Hopkins is great as the sheriff, Will. Director John “Bud” Cardos does an excellent job with the pacing of the movie, keeping the action coming quick enough to keep the audience involved. There are many dark and creepy scenes that build tension and give the appropriate jump scare here and there. The stunts and fights look great and show Cardos’ experience with that sort of work. I even thought the makeup and special effects work were very good for a low budget movie.

This is one of the best discoveries I ever made browsing the shelves of my local video store many years ago. Not to date myself but I did pick it up off of the new releases area. Yeah, I’m old… But with age comes wisdom so listen up and find yourself a copy of Mutant. You won’t be disappointed.

Posted by Gutmunchers Lives at 10:39 AM