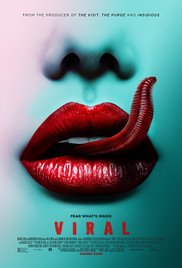 In my review for Jeruzalem I already mentioned that I’m not a fan of new horror. Most of the movies don’t appeal to me, but I still watch them. I don’t want to miss a great movie just because of preconceived notions. When something interesting shows up on Netflix it is easy to give it a chance. All I’ve invested was some time. So was this movie worth my time?

Viral follows a couple of sisters, Emma and Stacey, who are the new kids in a small California town. We meet their dad, a local science teacher, who likes to gross the kids out with videos of parasites being removed from their human hosts. Yes, this might be a bit of foreshadowing. They movie also sets up that there have been outbreaks of some new illness in China. When Dad heads off to the airport to pick up Mom he gets trapped outside the quarantine zone because right after he leaves the disease shows up in town. Not only does the town get closed off, but eventually the phones and internet get cut as well. This leaves the sisters trapped in their house and surrounded by the infected. Who can they trust? Is anyone coming to save them? So many questions to be answered.

I’m not going to spoil Viral. This isn’t a great movie, but I still enjoyed it. It takes the typical infected plot and puts an interesting twist on it. The parasites that pop up at the base of the neck and control the hosts are both creepy and horrifying. The first time we see the feelers pop out of the ears of the infected had me squirming in my seat. So, bravo with the creature effects, which are all CGI but work perfectly. 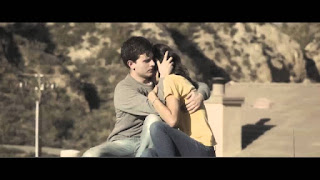 The plot has some pacing issues. The initial buildup to the infection is handled really well. There are nice little hints that setup later events. The characters are fleshed out so that later on when they are in danger the audience cares. I’m trying to keep things vague so as not to spoil anything. Back to the pacing issues I was disappointed with what happens after things go to hell and the sisters lock themselves in the house. Except for a few bursts of action much of the rest of the movie involves the characters trying to call or text on dead cell phones and talking about nothing. Did I need to know that the older sister was bitchy because she caught their Dad cheating on Mom? The characters were already established and I didn’t really care. I also think the ending is a bit weak. Those who survive end up wandering out of the quarantine zone without being challenged? This is done without any hint of why.

Viral is a decent movie. As I’ve mentioned above it has some issues while at the same time doing other things well. It is worth checking out at least once and I know that I’ll be looking for more from the writers and directors responsible for it.

Posted by Gutmunchers Lives at 7:41 PM