Road Trip to Dead End Cinema – Most annoying character ever! 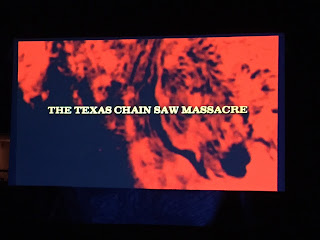 It is time for another Dead End Cinema. For those that might be new to the blog this is an event that my friend Eric has in his backyard outdoor cinema. This time around he decided to show Texas Chainsaw Massacre and Friday the 13th part III. When it came time to title my trip for this double feature I was planning on going with some slasher theme. Though for many of us Chainsaw isn’t necessarily a slasher movie. But then I realized something amusing. Franklin, everyone’s favorite wheelchair bound brother, and jokester Shelly are a couple of the most annoying characters to ever appear in a horror movie. Sounds like a great theme for the night! Time to get the body count started.

The first movie of the night was The Texas Chainsaw Massacre. It takes place in the early ‘70s when a van full of young people run into a family of cannibals in rural Texas. This is another prime example of people that really should have minded their own business and listened to the locals. But no, they just had to wander around and ended up meeting up with Leatherface. Not really his fault they were trespassing.

Again, this is a movie that I’m assuming most of you reading this have already seen if not you really should. It belongs in every horror fans collection. The direction by the late Tobe Hooper is excellent and meanders thru the hot Texas sun establishing the characters while building the tension. We the audience know something is coming, but not when. It is also interesting to note that many viewers consider this to be a very gory movie. Watch closely though and you will notice it is all implied and reinforced with some excellent sound effects. And of course, I should also mention Franklin, who meets the business end of a chainsaw a lot later than most of us would have liked. Seriously this guy is so damn whiny, but I suppose that is the point. 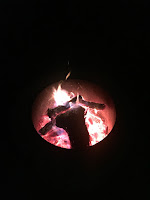 After Chainsaw, there was a short pause for bathroom breaks and to warm up by the fire. It was a very cold night so Eric had the pit going. Not that I’m complaining about the weather. I’m so ready for fall and Halloween that the fact it was chilly only added to the atmosphere. Plus, no mosquitos which is always appreciated. After getting toasty we headed back to the lawn chairs for the bottom half of the double feature.

Friday the 13th part III is one of the entries into the series that people either hate or love. This one picks up with a recap of the events of Friday II where we see that Jason managed to live. He has wandered off into the woods where he initially finds a couple who run a roadside store. After doing away with them he finds a house by another lake. Is this Crystal Lake? Not sure because they never say. Though you would think not since there aren’t cops investigating the recent massacre. Another group of attractive young people end up in Jason’s path when they come for a weekend of fun, including one that has a history with our masked killer. Jason does what he does and they do what they do, which is mostly die! 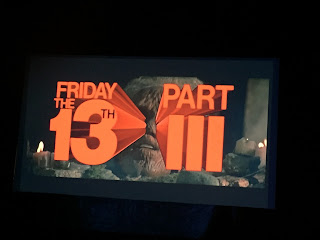 Fans tend to rip on this one because of the use of gimmicks taking advantage of the 3D. Let me just say that the process used is garbage. I’ve seen it in the theater in 3D and it isn’t any better than when you see it on your TV at home. But I’ve always felt that the silly attempts to capitalize on the use of it gives the kills a certain charm. Sure, they might not be as brutal as the first two, but I don’t care. I like the story and this is also the when Jason gets his iconic hockey mask. While the first is still my favorite this is the one that sets the stage for the character that has become ingrained in pop culture. We have Shelly’s magic box of props to thank for that.

One classic horror movie and one where a classic character gets the look that everyone recognizes. Not a bad way to spend a Saturday night under the stars. If you are in the Canton, Ohio area there are still a couple events that should get squeezed in before the weather gets too cold. Check out the Dead End Cinema Facebook page here. As always if you are doing something like this in your area please let me know by sending a message using the box on the right side of the page. We all need to keep the experience of watching movies with friends on the big screen alive.

Posted by Gutmunchers Lives at 11:26 AM