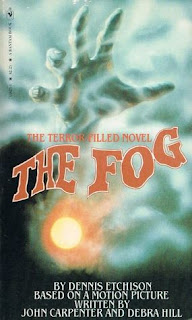 It has been a while since I did a Throwback Thursday post so I figured it was about time to dig back into the archives again. This is another in the series of Book reviews that I did for a website iI wrote for comparing the novelizations of popular genre movies with the films/scripts that inspired them. This time around I dug into the John Carpenter classic The Fog.

On the eve of Antonio Bay’s centennial terrible things are happening.  First a fog envelops a small fishing boat and one man is found dead the others missing.  The next night the fog comes ashore and more people disappear.  We follow a local named Nick and the beautiful drifter Elizabeth as they try to sort out what is happening.  Along the way they meet up with the local radio DJ Stevie and her son Andy.  Do they figure it out?  Does it have something to do with the town celebrating its anniversary?  Well yeah of course it does.

I’m back with another novel adaptation of a movie, this time around it is John Carpenter’s the Fog.  Before we being let me start of by saying I love the movie.  Seriously as much as I dig Halloween this one always given me way more chills.  Plus it has Tom Atkins in it, so it has to be awesome!  As is the case when I read a book based on a movie that I like I’m always ready to be annoyed and hate it.  You never know when an author decides to give you more backstory, or fiddle with the characters in a way that is more about them showing off than it is giving the reader another way to enjoy the movie.  So far I’ve had good luck with my foray into movie adaptations and this one is no different.

It is clear that the author, Dennis Etchison, follows the script that he was given to adapt very closely.  Ironically one of the main differences between book and movie happens because of that.  The big showdown with Stevie (the Adrienne Barbeau character) and the shipwrecked ghosts (oops spoiler…) that happens in the movie isn’t in the book.  She basically locks herself in a closet until they go away.  As a fan of the movie I know that they added the bit at the top of the lighthouse to give the movie a bit more action and the lovely Barbeau more screen time.  Can’t fault anyone for that, the book for sticking to the script or the director for “punching” up the movie.

There is one other subtle thing that I noticed when reading the book.  The character of Nick, played by Atkins in the movie, is much less pleasant.  He is less kind to Elizabeth in the book then he is on the screen.  Not mean but basically grumpier.  I suppose this could have happened for a couple of reasons.  Maybe the author just saw the character that way when reading the script.  It is also likely that Atkins put his own stamp on the character and softened him a biIt.  Either way both versions, while slightly different, still fit well with the story so no harm.

Finally I’d like to talk about the writing skills of the author.  Many times books like this were sort of pawned off on whomever was available to knock them out.  This means that more often then I’d like these books are devoid of effort because the writer was simply doing the minimum for a paid gig.  The Fog might be the best written movie adaptation that I’ve ever read.  Etchison is masterful in his use of language.  Where Carpenter gives us visuals of the fog creepily moving thru the town setting the tone for what is supposed to be a really scary movie the author does the same with his words.  The descriptions are so detailed and expertly done that they set the mood without bogging the action down.  I found myself rereading sections not because I was lost but because it was drawing such a pretty picture I wanted to “see” it again.

This is a great book based upon one of my favorite movies.  I need to find more things written by Etchison (who also adapted Halloweens 1-3 under pseudonyms) because he is a great author.  Obviously I recommend this book, especially if you like the movie.

Posted by Gutmunchers Lives at 10:12 AM