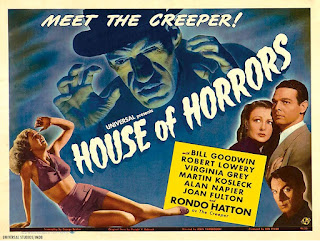 Time to delve deep and talk about an honest to God classic of the horror genre. This movie has an amazing cast, a deep connection to the horror genre, and was helmed by Jean Yarbrough. You may not be familiar with that name, but he is an amazing director that has some great genre flicks to his name but has been forgotten by all but the most diehard fans of the classics.

The story revolves around a frustrated artist named Marcel De Lange who is angry that the critics don’t understand his genius. We see this when an arrogant critic named Harmon talks a wealthy patron out of buying De Lange’s latest piece by belittling it and the artist right in front of him. This sends the artist out into the night, perhaps to harm himself. Instead, he finds a “hideous” man who is wanted for several murders. He is called the Creeper by the press and is shocked when De Lange rescues him from drowning.

After nursing him back to health The Creeper decides he finally has a friend in De Lange. Though the artist takes advantage of that by talking about how cruel Harmon was to him. The Creeper does what he does, and the critic ends up with a snapped neck. The police initially think a young artist who was also criticized by Harmon is the most likely suspect, but eventually with the help of his girlfriend, yet another art critic, they figure out what is going on. Will they do so before The Creeper ups his body count even more? You are just going to have to watch the flick to find out!

House of Horrors is a very tight movie that clocks in at just over sixty minutes. It wastes no time getting to the good stuff but does show us some character development which is very important. It also does that neat trick that the best horror stories do and that is make you sympathetic to the monster.  Yeah, The Creeper is a killer, but he is also totally manipulated by the artist. It also seems that this is perhaps the first time anyone has treated him with kindness in his life. I felt bad for him, you know when he wasn’t killing people…

The above is partly accomplished due to the performance of Rondo Hatton, who plays The Creeper. He never got enough credit for his acting abilities and was more than just a killer or heavy. In his far too brief career, he was good in just about any part he was cast in. He also reprised the role as The Creeper in another movie The Brute Man from the same year as House of Horrors. He was also the same character in an earlier Sherlock Holmes movie The Pearl of Death. If the name sounds familiar the Rondo’s are the annual horror awards given out to flicks as well as horror hosts and other such genre related artists. The statue is based on the one from this movie. Just thought that was a fun tidbit to add into the review. 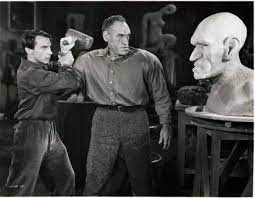 The rest of the cast is great and includes Martin Kosleck as De Lange. I loved him in this movie, but my favorite performance from him is his is role in the underrated The Flesh Eaters from sixty-four. If you haven’t’ seen that one track it down. He also had a role in the Batman show from the sixties. I mention this because the unfortunate critic Harmon is played by Alfred himself, Alan Napier! We also get Virginia Grey and Robert Lowery who was in The Undertaker and His Pals. There were a lot of familiar faces in this one.

The movie is beautifully made with lighting that accentuates the creepy vibe. They are especially good when Hatten is slipping in and out of the shadows stalking his prey. A well light black and white horror movie is still one of the most beautiful things you will see on the screen. House of Horrors is a fine example of that. Music is also spot on and helps to build the tension and felling of dread. If you can’t tell I love House of Horrors! I highly recommend that you check out this classic flick. Not only does it stand alone as a great movie, but it’s connection to horror history is another reason that this movie is a must see.

Posted by Gutmunchers Lives at 10:05 AM