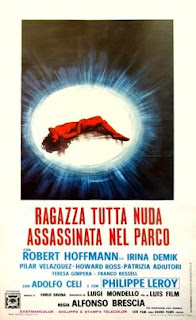 Well, this is a movie that has an interesting title that has nothing to do with the story. Things kick off in Berlin towards the end of the Second World War. We see a man and a creepy girl planting a bomb next to a woman and a young boy. They are using the bombing raid going on outside to cover their crime I suppose. Okay movie you have me interested.

Then the action moves to present day… nineteen seventy-two. There is a dead guy on a haunted house ride. It looks like he was killed for the cash he had on him. Though the insurance company that just wrote him a million-dollar life insurance policy is suspicious. So, they assign their best man, Chris, to investigate. He gets close to one of the daughters of the deceased man, Catherine, and by close, I mean between the sheets close. Hey this is a Giallo, so people get naked and grown-up hug a lot.

Catherine eventually takes him to meet the rest of the family which consists of her mother and sister. Mom is wearing a ring that we saw the girl from the flashback wearing. I wonder if that means something! Yeah, it does. More murders happen, mysteries are resolved, and an evil plan is exposed. Along the way we get an old guy murdered in an amusement park and a naked girl killed on the front lawn of an estate. But oddly enough not a single naked girl murdered in a park. Damn it movie you lied to me!

This movie hits many of the hallmarks of the Giallo genre. You have a really good mystery that goes thru some twists and turns before being solved. The requisite sleaze is on display with several ladies and fellas disrobing on screen. The opening with the Nazi killing the family and escaping with the young girl sets the scene and when you find out more ends up being very creepy. The movie is laying the groundwork for a fun plot before we even meet the main cast. That is a nice trick.

As we watch things play out, we are given enough red herrings that the solution isn’t obvious. Though I’ll admit I did figure it out after one of the false suspects was eliminated. Still, it didn’t ruin it for me because while I knew the who and why the how escaped me. When we the viewer find out how it was done it makes sense. Though you have to jump thru some mental hoops to get there, it is plausible. Nothing worse than feeling cheated by a mystery that is solved with information you didn’t have or that is so impossibly complicated it would have never happened. They did a good job avoiding that with Naked Girl Murdered in the Park, despite the misleading title. Yeah, I just can’t let that one go.

There are a respectable seven murders in this one. Well okay one of them isn’t murder but an accident. Sadly, there isn’t the blacked gloved killer moving around thru POV shots and the violence is mostly kept offscreen. Still, it works for this story and the rest of the movie is so strong that I was okay with it. All in all, this is a movie worth checking out.