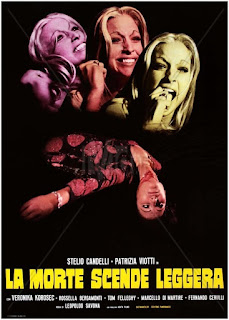 The Giallo fun continues with this one. The action kicks off with a POV shot of someone sneaking around an apartment. They eventually find a woman sleeping in the bed. Then we watch as a man excitedly drives to his friend’s house for help. Apparently, the woman we saw sleeping was his wife and she was brutally murdered. He knows the police will blame him, because it is always the husband, so he asks for help. The Judge, his friend, gets on the phone and starts setting things up. It seems that no one really likes Giorgio, the panicked man, but they have to help him. Why? We find out later.

Giorgio and his girlfriend Liz… maybe he did kill his wife… are hidden away in a yet to open hotel. We watch them go a bit stir crazy while his friends try to figure out who the real killer is. This leads to some stuff that I don’t want to spoil in my review but be warned it gets confusing before it all makes sense. I will say that along the way we find out that Giorgio smuggles drugs for an organization that funds all sorts of important political figures and because he makes them so much money, they feel obligated to protect him. Eventually we do find out who killed his wife and why they did it. It was oddly simple and wasn’t a great payoff for the complicated and confusing plot.

This is a hard one for me to recommend. The story is interesting, and I was kept guessing for a good long time as to who the killer was. So, there it succeeds in a way. Unfortunately, one of the reasons for this was due to a confusing and at times incomprehensible script. The movie waits until the very end to explain the role that the Judge and the police play in the story. There is also a far-fetched bit with a director and his cast of actors that sort of spoiled things for me. When the story stays with Giorgio and Liz it is much better. Them going stir crazy being locked up in the empty hotel and wandering around in the dark provide the best scenes.

If you haven’t figured it out yet the genre of Gialli leans heavily into the killing and sleaze. I mean I keep talking about it so you really should know that by now. The movie does give us a good bit of skin on screen, from both genders. A lot of “naughty” business is gotten up to in Death Falls Lightly, so expectations were met. Kill wise we get a measly three with two of those happening at the very end. And the wife dying isn’t even on screen. So here we have a murder mystery without any murders for a long time. Some movies might be able to get away with that but not a Giallo like this. The one kill we do get to see happen is very tame, even by the standards of the early seventies. Here my expectations weren’t met.

The at times confusing plot coupled with the lack of good death scenes ruined the movie for me. It had potential and fans of the genre might be interested in checking it out once, but there are much better movies out there to watch. I can’t recommend Death Falls Lightly.

Posted by Gutmunchers Lives at 9:45 PM