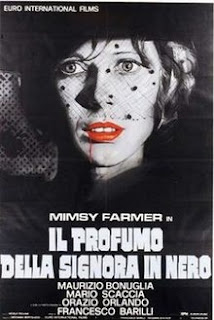 This is another movie that falls into the Giallo category, but at times doesn’t feel like one. As I explain the plot, I think you will see where I’m coming from. As the movie opens, we are met with a beautiful blonde woman, played by Mimsy Farmer. She is getting ready and while leaving her apartment stops to turn all the lights on. Her name is Sylvia, and she is a big shot at a chemical company. We are also introduced to her boyfriend who is annoyed by how much she works. The movie makes a point to show us how driven she is. There are also some other friends and neighbors, but really no one else matters.

As the story unfolds, we see that Sylvia had a traumatic childhood. Her father died when she was young and she walked in on her mother with another man, who was very creepy about it. It is also hinted at that she might have killed her mother. This becomes important when she not only bumps into the boyfriend but starts to see what I think is the ghost of her mother, the titular Lady in Black. You might have noticed that there aren’t any murders yet. Well, they do come in the end but I’m not sure that they actually did. Why? I think that Sylvia was either hallucinating or crazy the entire time. The events in the movie may or may not have happened. Yeah, this is one of those flicks.

Be warned spoilers are coming. While not a traditional Giallo The Perfume of the Lady in Black is a decent mystery. While watching the movie I kept wondering if Sylvia was being gaslighted. For those who don’t understand that reference I was thinking that those around her were using her childhood trauma to their own advantage. Perhaps pushing her over the edge for control of the company or some inheritance. I’m thinking that the characters were written and portrayed to that end as they seem creepy for the sole purpose of messing with her. Whether that is the talk of black magic and human sacrifices, the fortuneteller bringing up her past, or the bit with the tennis racket and the blood there are lots of spots where characters are pushing her buttons.

I was sold on the above premise as it made the most sense especially when I saw all of the characters, including those who died, show up for a secret meeting. Is there where they get together to split up the spoils of their plan? Kind of. Sylvia’s body is laying on a slab and they cut her open and start feasting on her organs. Honestly, I have not a damn clue what is going on here. I suppose it might be some horrible hallucination by Sylvia or it might just be the movie being weird for the sake of being weird. Not sure but in the end, I don’t think I care. 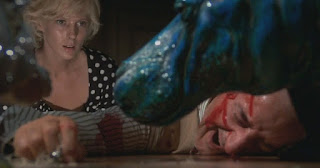 I was intrigued from start to finish with The Perfume of the Lady in Black. The story is engaging because it has a surreal feel to it. From the little girl who invades Sylvia’s home, to the weird bit with her walking in on her mother and the other man there is always something surprising showing up on screen. I was never bored, and while confused at times there was enough to sink my teeth into that I was never frustrated by the story. Mimsy Farmer is excellent in the role and if I’m to be honest is also a very beautiful woman. That is important because we do get the requisite naughty bits that all good Italian genre flicks provide.

Since I’m on the subject of expectations I think Giallo fans might be a little disappointed in the fact that this is mostly a bloodless movie. Other than one obviously fake dead cat, a finger, we only get a bash to the noggin’, and a couple of clever attacks. The best gag is the one at the end where she is sliced open and eaten, which they linger on and don’t pull back from showing. That is a good bit of effects work, but that is about all you get. If you are looking for a bloodbath this isn’t the movie for you.

I will freely admit that The Perfume of the Lady in Black isn’t going to be everyone’s idea of a good time. It is slow and has an overly complicated nonsensical plot. This is the kind of movie that requires you to not only watch closely but be willing to fill in some blanks for yourself. I really liked it, but I can’t argue with someone who hates it due to what I’ve pointed out above. Is that a recommendation from me? I’m going to leave that up to you… much like the movie does.