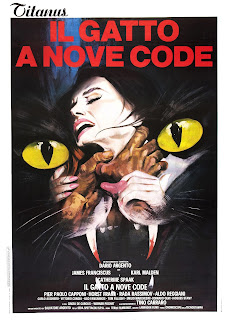 Time for another entry into Argento’s Animal Trilogy. I’ve already covered Four Flies on Grey Velvet, so I suppose it is time to check out Cat O’ Nine Tails. Yes, I also just realized that I’m covering them in the reverse order that they were released. That wasn’t on purpose, but since they don’t connect to each other it isn’t a big deal.

The action starts off with Karl Malden’s character, Cookie, a blind man, walking down the street with his young niece. Because he is blind his hearing is much better than normal, so he overhears a conversation in a parked car about blackmail. Stopping further along he asks his niece to look back and see who is in the car. This bit becomes important later. The next day there is a ruckus across the street from Cookie’s house, where he also heard the threat. It is a medical facility doing special research on genetics and a guard was assaulted during a break in. Though it appears nothing was stolen. Later a doctor from that facility is killed and Cookie’s niece notices from his picture in the paper that he was the man from the car.

Cookie seeks out the reporter who wrote the story about what at first appeared to be an accident. But when they have the photographer blow up the picture, he tells them someone shoved the man in front of a train. Before they can see it for themselves the evidence is stolen, and the photographer killed. This leads to even more murders as they attempt to solve the case. Eventually the murderer tries to warn them off and when that doesn’t work targets them. All of this leads to an explosive and fun conclusion.

I love this movie and in general really dig all of the Argento directed Gialli. Here the story is solid and easy to follow. While it maintains the mystery until the very end nothing feels forced or overly coincidental. The characters do rational things, except maybe the killer who is supposed to be unbalanced so that is okay. The bodies pile up as the suspect list is narrowed. Many times the pool is narrowed because the suspects end up dead. The story is setup so that we see both Cookie and the journalist doing their own poking around before coming together to pool resources. That keeps things fresh as we jump back and forth between them. When we get to the end it all makes sense. Though I was a bit put off by the fact that the reveal points us towards a character that we hardly get to meet. Then again, the characters are also shocked so I guess that was the point.

The kills in the movie are very brutal and well-staged. We only get five, but they are memorable. The first is a crazy gag where someone is rolled between a train and the platform as they are crushed. It is obviously a dummy, but I’ve not seen that before and it was interesting. We get a couple strangulations that linger on the person slowly dying. While not graphic it is disturbing and will stick with you. Finally, there is a bit with an elevator and hands getting shredded by a cable that was nice and bloody. All in all, this was some good stuff.

In case you were wondering yes, the movie does check the sleaze and nudity boxes that most fans expect when sitting down to watch a Giallo. I also wanted to mention the leads. Malden is great as Cooke and James Franciscus does a fine job as the journalist. When they are on the screen together the movie is even better. We also get some of the creative shots and lighting you would expect from an Argento project. There is even a killer car chase as well as a foot pursuit on a rooftop that are staged awesomely.

Cat O’ Nine Tails is a fantastic entry into the Giallo genre. If you haven’t checked out one of these movies yet and are looking for a place to dip you toe into the waters this is another excellent place to start. I highly recommend it.

Posted by Gutmunchers Lives at 1:03 PM