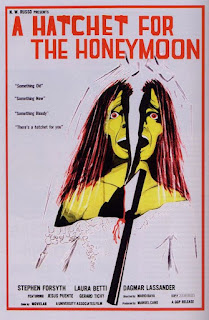 I haven’t covered enough Mario Bava for the site. Since I’m covering some Gialli I thought I’d take a look at Hatchet for the Honeymoon. While it isn’t a Giallo in the traditional sense, which will become obvious later, I thought it would be a fun inclusion.

The movie opens on a train. I’m a sucker for movies set on a train, though this is only the opening scene so bummer. We see a killer stalking a newly married couple eventually killing them both with a large meat cleaver. I guess that is the hatchet in the title. Something might have been lost in translation. The weird bit is we see who the killer is so there is not mystery there. His name is John Harrington, and he runs a bridal business helping women pick out their wedding dresses and do planning. He is in an unhappy marriage, has some mommy issues, and lives by the motto “A woman should only live until her wedding day, love once, and then die.” I guess that is why he kills.

Now you might be asking what the mystery of this particular Giallo is. Well John has some suppressed memory that he can glimpse when he kills. He isn’t only killing because he is homicidal but is also trying to figure out what has been torturing his dreams. That is a creative twist to the genre that I dig. We also have an inspector that is keeping track of John, suspicious that he has had something to do with the disappearances and murders that have surrounded the bridal business. There is clearly something up with that as well as with the new model named Helen who has showed up with some sort of hidden agenda herself. As you can see there is a lot going on here. 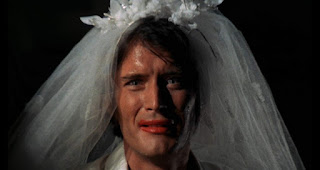 While not a traditional who done it, I enjoyed this movie. There are several questions that linger until the final scene, so I was engaged with the story until the very end. It was odd to follow the killer instead of an intended victim, but I’d have to say it works. I will admit that pacing can be an issue at times, especially when John is trying to work out his demons and being melodramatic. I don’t mind this myself, but I also can’t argue with fans that get annoyed with it. If you are looking for a lot of sleaze and kills every couple of minutes this isn’t the movie for you.

I must also warn casual fans that this is one of those movies that require you to pay close attention to if you want to enjoy it. Bava was an influence on Dario Argento and much like him you need to keep your eyes open for some important visual cues. It is important to realize that Bava is telling the story not only with the dialogue but with his camerawork as well. If you half watch this because it is “boring” you are missing much of what is cool. Some of my favorite visuals are binocular vision, the overhead creepy mannequin dancing scene, a distorted face in a serving dish, and a closeup of an eye that disappears into the darkness as the camera pulls back. I understand that this sounds a bit… well I guess douchey. But film is a visual medium and I appreciate creative and subtle efforts to make a movie look interesting. That is a hallmark of Bava and is on display here. This is a very stylish flick and should be appreciated for it.

The kills are light with only four. The best is when John chops up his wife, Mildred, and burns her body. This leads to a bit of fun where she is haunting him or is she? There is some question as to if this is a delusion or if it is a supernatural thing. I like how that is kept vague allowing for the audience to fill in the blanks. In the end I had fun with Hatchet for the Honeymoon but didn’t love it. The pacing issues do takeaway from what is an otherwise creative and interesting spin on the traditional murder mystery Giallo format. Though I fear that those not well versed in the tropes of the genre might not like this one as much as a more established fan would. I suppose I can cautiously recommend this one with the caveat of you might want to start with a movie like Eyeball before jumping into Hatchet for the Honeymoon.

Posted by Gutmunchers Lives at 7:36 PM