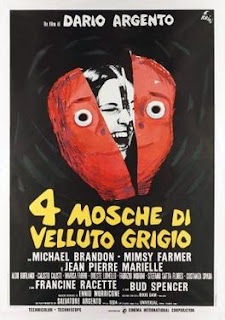 The Gialli keep coming. I realized I haven’t covered any of the classics so I have decided to fix that and there is nowhere better to start than with one of Dario Argento’s “Animal Trilogy”, Four Flies on Grey Velvet.

I’m going to do my best with the plot synopsis, but this is an Argento movie, so somethings are sort of left up to interpretation. Our main character is Roberto, a drummer for a rock band. After a recording session he sees a man who has been following him around and gives chase. Eventually cornering him he is angry and wants to know what his issue is. The man pulls a knife and in the struggle is stabbed and killed. What is really weird is that there is a strange figure wearing a kewpie doll mask taking pictures.

Using those pictures, the masked figure starts to torture Roberto by slipping copies into some records during a party and sending threatening letters. But since this all started off with him killing someone and running from the scene, he obviously can’t call the cops. Instead he turns to a motley crew of friends that I think are either bohemians or just homeless. One of them is played by the late great Bud Spencer who is wonderful in his limited role. He also hires a flamboyantly gay detective to help him figure things out. That might not seem like a big deal, but this was the early seventies so I’m sure it was shocking to see that character on screen.

I enjoy the hell out of Four Flies on Grey Velvet. While it might not be the best Giallo I’ve seen and might not even be the best of the “Animal Trilogy” it is a solid flick that delivers what I expect. The identity of the killer is kept from the audience until the very end of the movie, but when it is revealed it is a great twist. Have to be careful as to not give anything away. If you go back and revisit the movie, which I have on several occasions, it is entirely plausible. Nothing worse than watching a flick like this only to realize the plot doesn’t support the big reveal. I know that a lot of fans complain about Argento’s movies having very thin plots, and in some cases they are correct. But here it is well constructed and thought out. 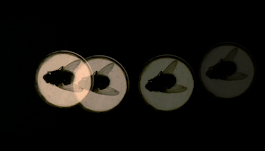 You have to have a bit of sleaze in your Giallo and we get some here. While Argento doesn’t wallow in it like some of the other directors there is a bit where Roberto jumps into bed with the cousin of his wife after she leaves him. Just because she is scared and leaves the city after the killer keeps breaking into the house, he gets annoyed and at the first opportunity beds her cousin? This leads to some naughty stuff and a bit of nudity. The Giallo genre more or less hangs its hat on scenes like the above so it was a must.

What I didn’t expect was the comic relief. Between the detective and the bohemians that come to help Roberto we get some very funny scenes and dialogue. I’ve already mentioned how much I loved seeing Bud Spencer in his supporting role, but the other actors are equally as entertaining. There is a bit of important dialogue delivered to move the plot along in a scene that takes place at a casket or undertaker convention/show. Pay attention in the background for some subtle physical humor. What could have been a boring exchange is livened up by where it takes place.

There are five deaths in the movie with a couple of them being off screen. The others are decent with the highlight being a slow needled into a chest to induce a heart attack. That is what I would say is the most explicit of them. If I have a criticism of Four Flies on Grey Velvet, it is that I think they missed a chance to go all out on the onscreen deaths. Even by the standards of the early seventies this is a bit tame. Then again, I can see an argument being made that this isn’t that kind of movie.

I have a final thing to mention before I wrap things up. One of the best parts about Gialli are the titles. They normally all give some clue to an important plot element or twist. Sometimes they are giving you a giant hint as to the identity of the killer. Here Four Flies on Grey Velvet refers to an image they pull off of one of the victim’s retina’s after their death. The science isn’t very good, but as far as plot devices goes it is fun.

If it isn’t obvious yet I really like this movie. This was the hardest of the Argento movies to find for many years and I was really excited when MYA announced a DVD release about ten years ago. That is the disc that I watched for this review, but I think that there might be better releases put out since then. Regardless I think it is well worth your time tracking down a copy of Four Flies on Grey Velvet. If you are new to the genre this is a wonderful place to start and if you are already a fan this is a must see. I highly recommend it.