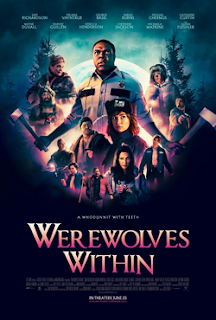 Finn has arrived in a small town, Beaverfield, to serve as their new park ranger. He arrives and spends some time meeting the locals, who are an odd bunch. One of those locals is postman…er postwoman? Her name is Cecily, and she is also a newcomer to the town. They stroll around delivering the mail and she fills him in on the town gossip. This is a clever way to introduce the audience to the characters and the setting.

Not long after this is established the killings start. Bodies are found, dogs are killed… boo movie… and paranoia reigns. At first, they band together as there is safety in numbers. But soon after they turn on each other and split up. This is just what the werewolf wanted as it starts to pick them off. Or does it? The people of Beaverton seem just as happy to kill each other before the creature can get to them. In the end we find out what is going on and why it is happening. Honestly it is a solid way to finish the story.

Low budget werewolf flicks are normally not that great. But this movie bucks that trend. They keep the creature under wraps and don’t show us anything until the end. That allows them to not do too much with the effects, though when we do see it, the creature doesn’t look too bad. Though if we saw the monster on the screen too much it might have ruined it for me as I’m not sure how it would have held up under the scrutiny. The kills and gore are okay, but not terribly explicit. If you are looking for limbs to go flying and blood spraying everywhere this isn’t the flick for you. What does Werewolves Within give us, you might be asking. 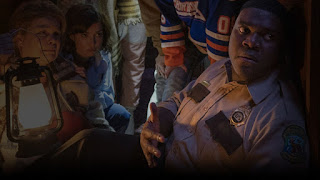 Werewolves Within is one of those odd horror flicks that is carried by the cast of quirky characters. Finn and Cecilia are our main characters in the movie but there are lots of supporting roles like the crazy mountain man, the rich gay guys from the city, the local pipeline businessman, and a couple of crazy redneck types. At times they do come off a bit as stereotypes, but overall, the story never feels like it wants to be overly serious, so this doesn’t bother me too much. The cast does a very good job in their roles and the movie is paced decently so that it never drags or feels dull. It is a good time from start to finish.

As I was researching for my review, I came across the fact that this was based off a video game. I’m not a huge gamer but I can’t believe that I missed that fact before watching Werewolves Within. This makes me even more impressed with the movie because most video game adaptations are a mess as I firmly believe it is hard to translate from one type of media to another. The fact that this was done so slickly here is very cool.

Obviously, I dug this one and am going to recommend it. I will drop a warning here. If you are looking for a serious horror flick this isn’t for you. It has a more lighthearted feel, though with a body count, than a flick like the Howling. This isn’t that kind of movie nor was it intended to be. Manage your expectations and I think you will have a blast with Werewolves Within.

Posted by Gutmunchers Lives at 2:44 PM