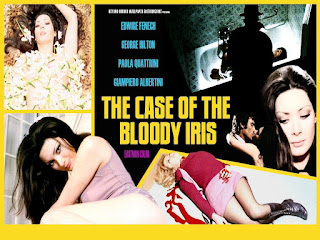 I can’t believe that it has taken me this long to get around to reviewing a Giallo starring the lovely Edwige Fenech. She was a very big deal in the genre and made many classics. Well now I’ve fixed this omission as we are going to take a look at The Case of the Bloody Iris.

The movie kicks off with us seeing a woman using a phone booth. She calls someone who tells her they are alone and to come on up. She enters a large apartment building and gets on a crowded elevator. People come and go until she is alone, which is when a black gloved killer steps in and stabs her. Now ladies and gentlemen that is how you start a damn movie! She is found by some people, one of which is a beautiful black lady named Mizar who excuses herself as she has to get to work. We are also introduced to the quirky stamp collecting cop investigating the crime.

Speculation is made as to who killed the girl and what she was doing in the building. While that is happening, we see the same black gloved killer murder Mizar by drowning her in the bathtub. That means her apartment is now available so Andrea, the architect whose firm is running the property, moves a couple models who he hired for an advertising campaign in. One of those ladies is Jennifer, played by Fenech, who is trying to get away from her abusive husband who wants her to return to the marriage and his sex cult. Hey this is a Giallo, so we must have some sleaze! Sure enough the killer starts to stalk the new inhabitants of the apartment. We are introduced to some more suspects, more people are killed, and eventually the mystery is solved.

This is a classic Giallo. They seriously don’t get much better than this. Fenech is beautiful and has the acting chops to carry the story along. The mystery is engaging, and the movie keeps you guessing until the very end. There are clues along the way that if you notice them will point you towards who the killer is. Not giving the audience a chance to figure it out is a big pet peeve of mine when it comes to any murder mystery. While I didn’t initially figure it out upon a second viewing, I saw what I missed. This is a sign of a quality flick.

We get a respectable six kills in the movie. The camera lingers on the stabbings and slashings. They are pulled off nicely so I’m glad that we get a chance to see the mayhem onscreen. This also adds a level of nastiness to the murders that goes a long way towards making this a memorable movie. In additions to the stabbings, we get death by steam pipe, an ex-husband stuffed into a closet, and my favorite the previously mentioned bathtub drowning. That one is particularly disturbing as the character is alive and begging for their life as the water slowly rises.

It’s a Giallo so I have to mention the sketchy parts as they are expected. We get plenty of nudity, especially from Fenech. There are some naughty bits on display with several sexy times had by the characters. There is also a cringeworthy conversation here and there about the Mizar character that might offend some people. But this was the early seventies in Europe and while I don’t think it is okay, I will cut the movie some slack. Just thought I should mention it.

The Case of the Bloody Iris is shot beautifully with all sorts of interesting lighting choices and camera angles. This is done without being distracting and just adds to the fun. The same can be said of the soundtrack that is filled with groovy seventies music. Honestly, movies from Europe in the seventies just sound different from anything else that I’ve ever watched. Oh and if you wanted to see some odd fashion choices that used to be hip this is also the flick for you.

The Case of the Bloody Iris checks all the boxes that I’d want a Giallo to mark off. Great story, lovely ladies, fun kills, and a satisfying unmasking of the killer. This is one of the best that the genre has to offer, and I highly recommend it.

Posted by Gutmunchers Lives at 2:04 PM