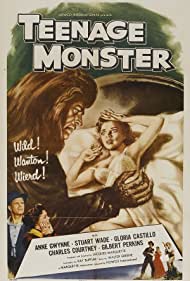 I’ve spent most of my life tracking down and watching every fifties monster movie available. Somehow, I keep finding new to me flicks which is what keeps me excited about this hobby and always on the lookout for new to me stuff. Teenage Monster is one of those that I recently stumbled over.

It is eighteen eighty and we meet a family struggling to get their gold mine to pay off. There is Ma, Pa, and their young son Charley. After a brief introduction we see a meteor hit the mine killing Pa and mutating Charley. He has a terrible scar on his face which is how we realize thru a helpful onscreen prompt that seven years have passed he is now the large hairy bigfoot looking creature. If his incredible strength and childlike mind aren’t dangerous enough, he also has an anger issue and overreacts to stress. The rest of the movie is him killing random folks until he grabs a girl named Kathy. She seems nice but manipulates him into doing some killing for her. But Charley isn’t stupid just naive and eventually he figures things out. The only way his Ma can be happy and free is for him to go. Since she is blackmailing Ma, he takes Kathy with him!

Not only is this a new to me fifties monster movie but it is also a western! I was a little disappointed that we didn’t get as much cowboy action as Charley sneaks around and stays in the shadows. But then they also establish that while he is very strong, he isn’t immune to a Winchester rifle. So, I guess that it would have been a much shorter movie. Though it does only clock in at a little over an hour which makes for a briskly paced bit of cheesy fun. The story wastes little time before getting the ball rolling. The bodies start to drop rather quickly as Charley smashes anyone he finds… well most everyone. When he meets Kathy, he kidnaps her and brings her home to have a friend. I also think he gets a bit of a crush on her. This leads up to a neat bit of messing with our expectations when Kathy turns out to be not so innocent and immediately becomes a villain. I didn’t see that coming and appreciated it. 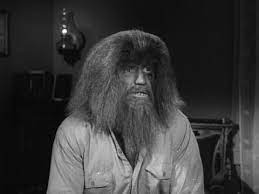 The cast is solid and filled with working character actors and “B” list faces that you will have seen before. The highlight for me was seeing Gloria Castillo as Kathy. She is one of my favorites from the fifties for her performance in Invasion of the Saucermen. Anne Gwynne is Ma and appeared in House of Frankenstein as well as Murder in the Blue Room which I need to cover during my next mystery marathon. Like I said there is some talent here and they give it their all.

The thing that most surprised me about Teenage Monster was how well they did with the creature design. It basically looks like bigfoot in clothes, but it works. They use some forced perspective and platform boots to make the monster look larger than he is which I love. Old school Hollywood tricks are still the best in my book. The killings aren’t explicit, but then this is a fifties flick so you wouldn’t expect them to be. Basically, he strangles or pounds his victims until they die.

This was a fun way to kill an hour. You get a sympathetic monster, a scheming villain, some comeuppance in the end, and sort of a happy ending as Ma, while sad, is finally free to continue her life. They put a lot of effort into what many would have considered a throwaway “B” picture. I appreciate that and recommend everyone check out Teenage Monster.

Posted by Gutmunchers Lives at 10:27 AM