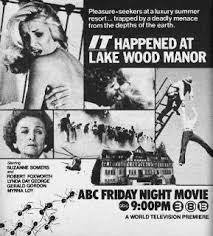 More made for television fun here at the Horror Dude Blog. We have had vampires, werewolves, Bigfoot, and even some killer bees! I figured it was about time to hit up the ants for some creepy fun. Really, I hate ants so probably not fun…

A construction crew building a new hotel on some pricey real estate accidentally disturbs a giant nest of angry ants. These aren’t any old ants though. After years of being exposed to hazardous chemicals and pesticides they have developed a bite that kills! First to go are a couple of construction workers but before you know it the ants are wandering next door to a historic hotel. We also get a subplot involving an unscrupulous real-estate mogul trying to buy the hotel in order to tear it down. Though that isn’t what he tells the family that doesn’t want to sell. Yeah, he is so toast.

More deaths occur as the nasty little buggers literally cover the hotel trapping a few unlucky guests. Though I thought like Tarantula Deadly Cargo they would actually kill the kid, but no he survives. I suppose that is to be expected otherwise why would I be so shocked when they did off a youngster? Who else lives and who dies? I won’t say for sure, but the finale gave me nightmares when I was a kid. Still gives me the willies.

Not kidding Ants! still freaks me out. As I sit here typing the review my skin is crawling just thinking about it. This might be due to my own hatred for them as one night I woke up with a line of them crawling across my legs, or it might be because the movie still works. There are a lot of bad visual effects work, but we also get thousands of real ants crawling over the sets and the cast. Not only is it on their hands and feet, which are clearly not the actors, but their faces as well! This is so freaky.

The cast is filled with those on the rise and those on the decline of great careers. Robert Foxworth, whom you might remember from Prophecy, is our lead and the love interest of Linda Day George. She was in a number of great genre flicks as well. I’m also a huge fan of the old Thin Man series so seeing the legendary Myrna Loy in a killer ant movie was a ton of fun. We also get Bernie Casey, who we just saw in Gargoyles, in a supporting role. Brian Dennehy also has a bit part at the end as a fire chief. But many people remember Ants! as an early appearance of Suzanne Sommers just as she was about to hit it big with Three’s Company. This movie might have the best cast of any of the movies on my made for T.V. marathon.

I’ll readily admit that Ants! doesn’t have the atmosphere of a Kolchak movie, or the totally cheesy fun of the Loup Garou in Moon of the Wolf. But insects crawling on you still will freak most people out and the filmmakers know it. I really like this movie and recommend everyone give it at least a chance. As with most of the others on this list you can watch it on YouTube. Check out the link at the top of the review.