It has been a while since I’ve had a road trip to report on here at the Horror Dude Blog. But the weather has been getting nice in that still crappy but not horrible winter in Ohio way and some fun events are just around the corner. The first of the new year is the latest Twilight Zone Fest at the Canton Palace theater. 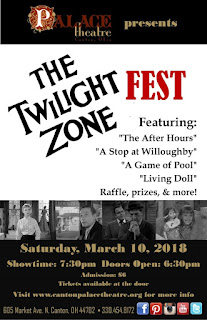 This time around I wasn’t flying solo. I picked up my friend Bubbles and the two of us headed out for some classic television fun on the big screen. We arrived at the Palace with plenty of time to spare, which gave me some time to go shopping. The nice fellas from Monster Bash had setup a booth with some neat merchandise for sale. I was on a budget but did manage to pick up a cool Wolfman t-shirt to add to my classic Universal Monster apparel. Shopping finished we met up with Eric and his lovely wife Angie. Loyal Horror Dude readers might recognize them as the hosts of Dead End Cinema. I can’t wait for the weather to get warm enough for some outdoor fun! The four of us found our seats and waited for the show to start. Be warned I’m going to do my best to avoid spoilers in case you haven’t seen these but can’t promise anything.

The first episode was The After Hours. Here we see a lovely young woman shopping at a department store. Something seems off when she ends up on the ninth floor to buy a thimble for her mother. The sales floor looks abandoned and the only item for sale is a single thimble… Oh and the department store only has eight floors! She ends up locked in overnight and some interesting secrets are revealed.

This is a decent episode and one that I guess would be sort of the second tier in notoriety. Anne Francis plays our lead, Marsha, and does a wonderful job. I’ve always been a fan of her work, especially Forbidden Planet and the underrated The Satan Bug. Mannequins feature heavily in The After Hours. I’ve always found them creepy and the episode makes great use of them. Being a Twilight Zone episode, you know there is a twist ending and we get a good one here. Though not as disturbing as some of the better episodes it was still fun.

Next up was A Stop at Willoughby, which I don’t remember ever seeing before. I mean I probably have since I grew up watching these, but this one never stuck with me. Garth is a miserable man trapped in a career that he doesn’t enjoy. Heck the job is basically killing him! We are introduced to his obnoxious boss and his heartless wife that is more concerned about the country club than him. Each night he takes the train out of the city to a home that he can’t afford. He always falls asleep and dreams of a simpler time in a town called Willoughby, or was it a dream? One day he decides to get off the train and visit.

Trying to be spoiler free so I’m keeping things vague. Of the four this might be the darkest of them. The ending is a kick in the butt and was unexpected. This is one of those Twilight Zone episodes that I thought would have a happy ending because of how kind and gentle the main character is. It certainly doesn’t end up that way and the big twist at the end was a little disturbing. I could tell from the audience reaction around me that they were a bit shocked as well. That is why the Twilight Zone is such a good show. Once you think you have it figured out you get hit with something out of left field.

The lights came up and we had intermission. I refreshed my beverage and browsed the Monster Bash/Creepy Classics table again. The theater also had their raffle and gave away some cool Twilight Zone merchandise. Then it was time for the last two episodes of the night.

A Game of Pool is another pretty well-known episode. This one stars Jack Klugman as Jesse, a local pool player that feels trapped under the legend of Fats Brown. One night while alone he wishes he could just play one game against Fats so that he could prove that he was the best. This is of course impossible because Fats has been dead for years, but then again it is the Twilight Zone! He gets his wish and the ghost of Fats shows up for a game. But what about the stakes? And does Jesse really want to be the best?

This is a great episode. We only have two characters, but they are played by the previously mentioned Klugman with Jonathan Winters portraying Fats Brown. Most of the what we see are them playing pool and sparring verbally. With lesser actors this would have been pointless and/or boring, but with these two it is amazing. They have excellent chemistry on screen and are a joy to watch. There is also a wonderful foreboding as we the audience realize that Jesse might be making a huge mistake. The ending is the most “Twilight Zone” of the four episodes that they showed. I loved this one.

The show wrapped up with Living Doll. Here we have a blended family, which was a unique thing to see on a T.V. show in the early sixties. The stepdad is cruel to his stepdaughter Christie. We find out that this is because he and his wife can’t have their own children, so he is stuck with someone else’s kid. Christie feels unloved, so her mother buys her a new doll at the store. This doll can talk and move. Only instead of the canned recordings when she speaks to the stepfather she gets progressively more threatening. This doll wants to kill him!

Living Doll is another well written story that is very creepy because of where the threat is coming from. Much like the first episode of the night featuring the mannequins here the doll is spooky and effective. Hearing that sweet voice dropping those lines works well to establish the scary vibe. As a bonus, the stepdad is played by Telly Savalas! He is amazing and makes everything he is in better than is should be. Except of course for Lisa and the Devil, nothing could have saved that. Much like Willoughby this one doesn’t end well for our lead actor, though here he was a jerk, so it wasn’t as disturbing. This was a nice way to end the evening.

The lights came up and I said my goodbyes to Eric and Angie. Bubbles and I decided to hit the IHOP on the way home for a bite to eat. Why do I always include food in my stories? Damn it I’m fat so food is part of my Road Trips! Really though I only mention this because as we were eating our food I noticed a pair of beanie wearing, beard having hipsters drinking coffee and playing chess... It made me laugh on the inside so I’m sharing.

There you go. I had another successful and wonderful night at the Canton Palace Theater. They always put on a good show and this was no different. There are a couple events coming up including another Three Stooges night and Monster Bash returns in August with Godzilla and friends. If you get a chance attend one of their events do so. I promise you will have fun!