So killer alien space bunnies. When I heard that description of this movie I knew that I had to see it. Something so incredibly silly is right in my wheelhouse. Plus, I haven’t had a good killer rabbit movie in a long time, so I was about due. 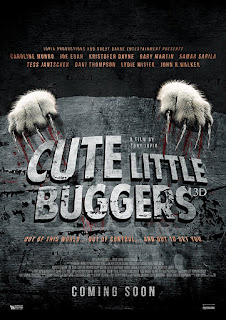 The Earth is being invaded by aliens, sort of. The actual aliens stay on their ship but send “penetration units” to a small English town to kick things off. We also find out that the reason for the invasion is that they need our women to breed with. So, they send these spheres that proceed to either copy or mutate the rabbits of the forest turning them into an army for the Aliens orbiting above. The bunnies proceed to kill the men and kidnap the women for breeding. Which I think the penetration units actually do since the Aliens never share a scene with the humans.

There is another part of the plot involving an estranged son and his father. They have issues that I think are supposed to be important and interesting. It really isn’t! We also have a love triangle between the son, his former love, and her douchebag fiancé. This is important when the rabbits attack the town and haul her off, causing the two men to compete in heroically saving her. Along the way they figure out the one big weakness of the rabbits turned killing machines. Pee causes them to explode! Okay I guess…

I really wanted to like this movie. If you have followed the Horror Dude Blog you’ve probably realized that I dig cheesy flicks. Killer Bunnies should make me very happy. While I loved the concept here there were two things that just killed any chance that I would enjoy Cute Little Buggers.

First and most importantly was the use of CGI. I’m not a fan of CGI normally, but I have come around to the concept that low budget movies really don’t have much choice. Plus, the technology and skill behind it has gotten good enough that it isn’t distractingly bad anymore. That said Cute Little Buggers has some of the worst generated digital effects that I’ve ever seen! This would have been embarrassing twenty years ago but to try and pass this crap off now is completely unacceptable. The rendering is so bad that the rabbits look like animated characters interacting with the cast. They also don’t match the background since the same models are used for daylight and night. So regardless of the lighting in the scene the rabbits look identical. This becomes very obvious and annoying.

The above combined with the decision to give them tons of screen time makes for a miserable experience. I mean why wouldn’t you have actual rabbits on the screen when they are just sitting under a tree or hopping along a field? I get having to use them when they sprout tentacles but CGI rabbits basically just being rabbits. Why the hell was that necessary? Especially given how lousy they look!

Secondly Cute Little Buggers is a movie in desperate need of an editor. The movie is an hour and forty-eight minutes long and has no reason for that length. For one thing the whole love triangle is unnecessary and plays no part in the rest of the plot. Are we really supposed to believe that no one would have gone after the women who were kidnapped? We are also treated to variations of the same scene. Boy and girl go off and get frisky. Girl takes off her top, rabbit shows up, boy gets killed and girl gets grabbed jiggling the whole time. This happens not once, twice, but three times. The only difference is the location. I get this gave them a chance to keep showing different topless women but who cares? Google topless ladies and you can get all you want without wasting damn near two hours of your time!

I could keep going on about Cute Little Buggers but I’m not going to waste any more time on it. If I sound angry that is because I am. This had so much potential but feels like a juvenile attempt and getting some actresses to take of their tops under the pretense of shooting a “movie”. Skip this one and check out Night of the Lepus for your killer rabbit fix and Hard Bodies if you need your bewb fix!