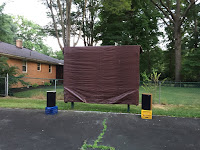 Time for another trip to Eric and Angie’s backyard for some classic cinema under the stars. This time Eric decided to show Prophecy and Cellar Dweller, a couple classics. Well one of them is anyway. Off I went with my trusty lawn chair and snacks for some cinematic goodness under the stars.

First up was Prophecy. If you haven’t seen it this is your basic nature run amok flick with a mutated bear running around the woods killing everyone it bumps into. Why? Well the local Indians believe it is a guardian there to protect them from the logging company that is destroying their home by cutting down the forest. In a way that is sort of true because part of the process involves the company using a mercury-based solution to keep the wood clean for pulping. Some good special effects and a decent looking creature make for a nice movie. Don’t expect too much though since this is only rated PG so it isn’t too bloody. For more details check out my full review here. I had already covered this one for the Horror Dude Blog. 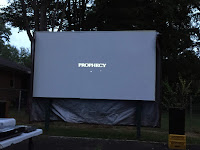 The second feature was Cellar Dweller. This is a Charles Band flick made under the Empire Pictures banner in the late eighties. Directed by John Carl Buechler this feels like the sort of movies that Empire was cranking out for the home video market. Cheap, quick, and somewhat entertaining. Here we get to see a comic artist accidentally release a demon while working on his latest masterpiece. Bad things happen, and he burns himself to death then the action moves thirty years later. The same house has become an artist’s commune of sorts. Sure enough there is another comic artists that ends up doing the same damn thing!

We get some decent special effects work in Cellar Dweller. This isn’t surprising since Buechler was known for his special effects work. I’ve always had a soft spot for him since he was responsible for the Ghoulies when they were honest to God puppets! We also get a brief glimpse of Jeffrey Combs as the artist who burns up. Too bad he wasn’t the main character. It would have made for a much more fun time. Not a great movie but if you dig Charles Band you might like this one. And the ending is absurdly funny and abrupt. 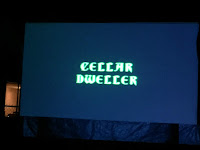 I always like to find a theme in these double features when I write up my little review/report here. This time I’ve decided on “C’mon Man Don’t Do It!”. In Prophecy they dump the mercury into the water thus making the monster that eventually kills off most of the cast. The lesson here is don’t throw mutagens into the damn water! Then we have Cellar Dwellar where not one, but two comic book artists decide to read from the creepy spell book… Seriously if you have a creepy ass spell book that looks like it is bound in human skin don’t read it! In fact, maybe you should burn that sumbitch 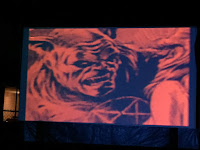 Before I left Eric hooked me up with some VHS tapes including a copy of People Under the Stairs. That is a movie that just screams to be watched on an analog format. As always I want to thank Eric and Angie for hosting such a cool event and inviting a bunch of weirdos into their home to watch movies. I’m also going to keep beating the same dead horse. Movies were meant to be watched with an audience not on your tablet or God help you your damn phone! Sadly, that isn’t how the world is going so it is up to us the true cinema nerds to keep this experience alive. If you are anywhere near Massillon Ohio check out the Dead End Cinema Facebook page to join in on the fun. If not, then do your own event. If you have any questions about how to do one of these or want to share how yours went email me at gutmunchers@gmail.com We have to stick together you know.

Posted by Gutmunchers Lives at 8:53 AM