It has been a while since I’ve done a Road Trip post and a very long time since I did a Dead End Cinema report. Probably since last summer actually. As an added bonus since I’m in the middle of my Slasher Marathon (click here for the list) it was nice that the double feature was for My Bloody Valentine and The Mutilator, both slasher flicks. Also went over early and went paperback hunting with Eric and Angie, the hosts of Dead End Cinema. Nice way to spend a Saturday.

Got up in the morning and headed over to scenic Massillon Ohio to meet up with Eric and Angie. We got to the Goodwill early to be there when they switched the book bins out. Honestly didn’t score that much, though I got a cool watch and the novelization of Fright Night (thanks Eric!) so I was happy. Then we grabbed a quick bit to eat at a local pizza parlor. Great family owned business that puts quality first. Fortified with a hearty lunch we continued our search for paperback gold. I did pick up a couple cool purchases as we hit some used bookstores. The highlights were a cool short story collection called Dark Forces which contains some tales from familiar names and Hero of Dreams which is more of Brian Lumley’s Cthulhu stuff. There were a few other items as well. Keep an eye out after the Slasher marathon for some book reviews to start popping up.

After chilling out at the house shooting the breeze and playing some Forbidden Island (cool board game) basically avoiding the oppressive heat it was time to setup. The gear was pulled out, chairs setup and extension cables run. It was still too light to start the movies so instead Angie pulled out a DVD of vintage commercials, this time choosing the cigarette ads disc. I learned that Camel Unfiltered cigarettes are very smooth and agree with your throat. By agree with your throat I guess they meant cause cancer and kill you. Seriously I was on my phone and every actor in the commercials died before their sixty second birthday of lung cancer! Kids smoking will kill you. 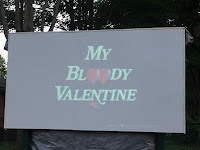 Some more people showed up and it was time to get things started. First up was My Bloody Valentine. This is my favorite Slasher movie, even before the gore was restored. If you aren’t familiar with the story the movie was heavily cut and the footage was thought to be lost. That is until they found it in a basement and put the gore back in. We watched the Blu-Ray from my collection that had the footage in it. Not everyone had seen the movie yet and most of those that had never saw the restored version. It was fun to watch the movie and see the reaction from those that hadn’t seen it before. For more about the movie check out my review here.

After a short break we fired up The Mutilator. While this isn’t as good as My Bloody Valentine it still is a pretty decent movie. The version that we watched was the Arrow Video release from my personal collection and is the most cleaned up copy you will find. It also has the added bonus of having the Fall Break title card rather than the Mutilator. Again, most of the people in attendance had never seen the movie before and were unaware of the infamous kill that they were about to see. I told them to keep an eye out for it and sat back to again enjoy the reactions of an audience that hadn’t seen it before. When we got to “the” kill the reaction was awesome. If you are interested in more check out my review from last year’s Slasher marathon here.

This was another great night of movies under the stars. We had a beautiful night with perfect weather. I very much look forward to these events every summer and want to thank Eric and Angie for letting a bunch of movie nerds invade their home every couple of weeks. If you are in or around Massillon Ohio check out the Dead End Cinema Facebook page here. If you don’t live close to us try to host your own event. If you do send me an email with some pictures and I’ll post them to the Blog. In this digital age with the next generation watching movies on their phones and tablets the only way we can keep this alive is to do it ourselves. So, let’s do it!

Posted by Gutmunchers Lives at 12:01 PM