I learned several things about myself on Saturday. First is that I’m way too damn old to get up at 5:30 in the morning to attend an event! I think that I need to get hotel rooms from here on out. But I did get up early and head out to casa de Wright to pick up Eric and Angie. For those of you that follow the blog these are the fine folks that host Dead End Cinema every couple of weeks. Eric also publishes a fanzine called Midnight Magazine. Being an independent magazine and this being a show focused on independent filmmakers is seemed like a good fit.

After picking them up we started out on the two-and-a-half-hour drive to Washington PA. Early morning and a long drive. This is the second thing that I learned about myself. I might be too old to do that sort of thing anymore. Do you see a theme developing here yet? Along the way we stopped at the drive thru to pick up some McDonalds. I can’t do a convention without being fortified with a healthy breakfast! Or at least a greasy one… 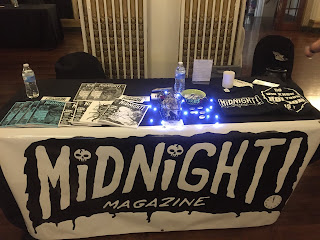 We arrived at the hotel and setup the Midnight Magazine table. For our first convention table I thought it turned out really nice. Tried to be interesting without too much clutter. Considering how many people stopped by and asked us what Midnight was about I think that it worked. After getting things together and getting the cooler with snacks setup I immediately abandoned them to stroll around the dealer’s room before it opened to the public. Hey, I was a vendor and going to take advantage of it!

My first stop was to get my copy of the Barn. This movie has been getting a ton of buzz and everyone loves it. I resisted the urge to order it off of Amazon and instead waited until Grossfest to buy a copy. That way I could get some autographs as well as the movie. As an added bonus I also got an autographed mini poster. I’m glad that I waited. My other stop was to check in with my friend Dan who has the movie hookup for that obscure out of print stuff you might be looking for. That is why we call him out of print Dan! He had my copies of Snake Eater III, a Lorenzo Lamas joint, and Nightwing. Nightwing is a hard to find seventies flick that was adapted from a book that I had recently read. If you have been reading the blog, you will remember that I’ve recently been obsessed with paperbacks recently. 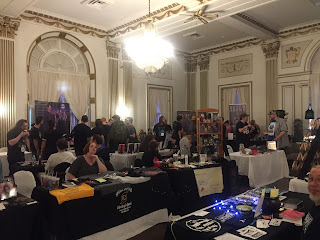 It was time to head back to the table and promote the magazine as the doors opened and the attendees rolled in. Though before that happened I did stop by and pick up a DVD of Eight Bit Bloodbath. I hadn’t heard of this one before but the guys at the table were really cool. The movie looks like it has a fun retro vibe, so I had to get a copy. Finally, I got back to the Midnight table. For a first time show I thought the turnout was great. As an added bonus everyone seemed to be there to support the independent filmmakers. It made for a much different atmosphere than many other shows I’ve gone to. People weren’t worried about collecting autographs and just wanted to talk movies. That was a lot of fun. After some time at the table I was ready to head back out into the dealer room.

Other than the barn I had two movies that I wanted to grab at Grossfest. One was the Silver Spotlight Films flick Caroushell. A killer carousel unicorn named Duke that escapes and gets some revenge on those that have treated him poorly. Hell yeah! While there I also picked up a couple of other DVDs including the Slasher flick Everyone Must Die. Expect to see that one to show up in the next Slasher marathon. Finally, I got my hands on a copy of Slaughter Drive. This was another movie that I had targeted as something I needed to check out. It has a cool premise that I won’t spoil here. You can expect a review to show up on my Blog and to hit the pages of Midnight Magazine. As an added bonus I also got a copy of Tonight You Die from Jim Roberts. I’ve been watching and enjoying his stuff since Welcome to Deer Creek which is ten years old now. Damn I got old. See I’m back on that again!

Spent the rest of the day talking to old friends, meeting new ones, and making connections. Some of the other highlights for me were picking up a Lyle Alzado flick from Dan called Destroyer and a Brazilian Zombie flick called Zombio 2. I also get one of the most beautiful and quirky children’s books ever. Though it works both for adults and kids. The art and story are amazing. It is called Ghoul and I think everyone should pick a copy up! It is on Amazon here.

This was something that I had been looking forward to since Tim Gross announced they were going to do an independent convention that focused on filmmakers and other creative people that normally get lost in the bigger cons. This is also the first horror show that I had purchased a table for. Though some stupid life shit happened that changed what I was going to do with my table I did end up having a blast with Eric and Angie. We promoted the hell out of Midnight Magazine and hopefully picked up a few customers and contributors along the way.

After the show was over we packed up and headed out. I did stop at Primanti Brothers for some grub before leaving the state. I can’t go to Pennsylvania without getting some good eats. After some tasty pizza we headed back to Ohio with me pulling in my drive close to midnight. I was exhausted but smiling. It was a great day. Though I did have to crash all day Sunday to recover. Did I mention that I'm getting old?

To sum up Grossfest I’d say this. We sold some Magazines and t-shirts. Personally, I got to meet some incredibly talented filmmakers and got to hang out with some old friends. I also got to make a couple new friends that I’m going to stay in touch with. There is nothing better than surrounding yourself with creative and positive human beings. Thanks to Grossfest I have a few more of those people to chat with. To the Grossfest crew including Tim, Tom, Terrence, Tammy, and all of the rest of yinz thanks for all of the hard work. I know that this sort of event isn’t easy or cheap and I appreciate you spending your time and money to make this happen. You do it again and I’ll be there.

Posted by Gutmunchers Lives at 10:40 AM