Continuing on my most recent Eco Terror kick I thought I’d check out this nature run amok book about Vampire Bats terrorizing the American Southwest. This was part of the Jaws “inspired” series of books and movies that came out in the mid to late seventies to cash in on the interest in stories taking real life creatures and turning them into monsters. Hey this was a New York Times bestseller so it was worth a look.

Our main character is a tribal policeman named Youngman who lives on the Hopi reservation in New Mexico. He is friends with an exiled medicine man named Abner who at the start of the book is talking to him about the end of the world. Between the actions of another tribe and those of the white businessmen greed has begun to destroy the reservation and the Hopi people. Abner casts a spell invoking the wrath of their God. The tool of this wrath is a swarm of Vampire Bats that not only kill people by feeding on them but infect the survivors with the Bubonic Plague. Double whammy right there.

The rest of the story is Youngman trying to dodge the corrupt Indians looking to lock him up and silence him. The news of the plague breaking out could ruin a big business deal with the whites for the oil reserves found on Hopi land. All this happens while he also has to deal with stopping the bats that are killing everything, including people, that they find in their path. Along the way he saves his love interest and meets up with a scientist that has a history with the bats separate from the main story of the book. 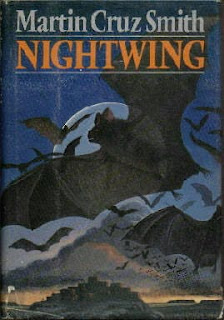 I’m torn on Nightwing. There are some decent bits of creature mayhem with the bats attacking people and swarming over them. That was what I would expect from a book like this and found that satisfying. We also get the corrupt businessmen that are trying to cover everything up to make a few bucks, even if that means sacrificing folks along the way. Again, this is a perfect fit for this story. On those points Smith does a great job. Where he loses me is when he tries to get creative.

There is an odd shift in the book between the scientific and supernatural. For part of the book the bats are just animals that have the plague and have come to the reservation because the scientists, Paine, has been poisoning their roosts in Mexico to get some revenge for the death of his father. Totally explainable and based in reality. Cool that works and makes sense. But then towards the end of the book we get Youngman taking some Datura root (a drug that induces hallucinations) and seeing the ghost of Abner who is using the bats to destroy the world. Suddenly there are ghosts of long dead Indians and magic circles. What happened to the science?

I guess that it could be that none of the magical stuff really happened, but the book leaves that vague. Even if it was a hallucination the fact that the tone changes so dramatically sort of bugged me. It felt like I was reading two different books and that made the narrative seem disjointed. I don’t care if it is science or magic but pick one and stick with it.

There were also several points in the book when new characters appear but aren’t introduced properly. I had to backtrack a couple of pages to understand who was who and how they fit into the story. There are transitions that aren’t clear between scenes that had me again backtracking to sort it out. For example, there is a dream sequence that pops out of nowhere that is also set in the past. This doesn’t happen at a chapter break either, it just happens from one paragraph to another. Hell, it wasn’t even the same character we were following in the previously.  I hate it when a book doesn’t flow properly and takes me out of the story. It seemed as if that happened every time I was getting into the groove.

Killer Vampire Bats… I so wanted to love this book. Sadly, there are just too many issues with characters and story for me to recommend it. There are so many better written books like this that I would recommend spending your time on. I’d pass on this one.

Posted by Gutmunchers Lives at 7:49 PM