I’ve been doing these Fab Fifties Friday posts for a while now and I realized that Roger Corman has only appeared once! For such a prolific filmmaker that seems weird. With that in mind I thought it was about time to take a look at another of his flicks. 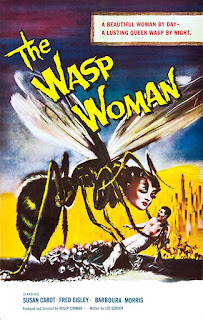 The Wasp Woman is a cautionary tale of vanity and the dangers of science run amok! Janice Starlin is a successful business woman who runs a cosmetics company. The movie starts off with a meeting where she is discussing declining sales with the board of directors. They point out that the problems started when she stopped advertising the products herself. In an ironic twist it seems that the only person concerned about her getting older is Janice. This makes her an easy target for a scientist named Zinthrop who shows up with a miracle cure. His idea? Using the royal jelly from a queen wasp to reverse the aging process!

Do I need to tell you how horribly this goes wrong? Well I’m going to. Things go sideways when Zinthrop is in an accident and Starlin starts using a concentrated version of the formula because she is impatient to see the results. This has the side effect of turning her into a wasp woman that paralyzes and eats her victims. Seriously they never find any of the bodies so she must be munching them down… but yet keeps her girlish figure! If you have ever seen a monster movie you know this doesn’t end well.

The Wasp Woman is an excellent example of why Roger Corman was a successful filmmaker. The story is simple, but well thought out. There is a formula to these things and they normally involve a flawed character that engages in dangerous behavior leading to bad things happening. Here we have Starlin struggling with her internal issues and grasping onto the research of Zinthrop as a cure all. What makes Corman so much better at this is that his script makes Starlin a sympathetic character. She could have been vain and unlikeable, but they take the time to show her vulnerability and desperation. This makes for a more balanced character that engages the audience. Far too many filmmakers considered movies like this fodder for the drive-in crowd, but Corman is trying to make a movie with real characters and it shows.

Being a complete nerd, I noticed and appreciated how the filmmakers cut corners without making it too noticeable. Pay attention and you will notice how few locations there are as they clearly shot most of this on a couple of sets. There is an effort made to make the same walls look different, but it is clear what they were up to. When they do venture outside it is either stock footage or new footage shot without sound to save money. None of this hurts the story at all and I’m not complaining. I like pointing it out because I’ve seen it done horribly by other filmmakers, but Corman is one of those guys that knows how to make it work.

Since this is a monster movie, we have to talk creature effects. For a low budget horror flick from the late fifties I was satisfied with what we get. It is clearly just the actress wearing a mask and gloves, but they are nice looking. As much as I dig the rubber suit craziness that we get elsewhere not every movie has the budget for that sort of thing. The kills are all offscreen and we don’t really see any bodies. But that is typical of a movie from the fifties.

I love this movie. Cheaply made and cheesy as hell, even by Corman standards, The Wasp Woman knows what it is and is the best version of that. I’ve said this before and will say it here again. Not everything needs to be art, sometimes being fun is good enough. I highly recommend this gem from one of the greatest and most prolific independent filmmakers of all time.

Note: Instead of a trailer I've linked the entire movie above.

Wax Museums are creepy. I take every chance to check them out, but they aren’t for the faint of heart. Really is that real Paris Hilton or a wax dummy? Can you catch something from a wax figure of her? Scary, right? Okay maybe that was a little mean… Nah it wasn’t! Enough of this nonsense let’s talk Waxwork. 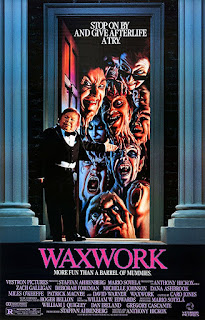 Things start off fast with a man being murdered and some things being stolen from his house. Then we are introduced to a bunch of annoying “teenagers” or maybe they are in college. Never quite sure because it doesn’t matter. They get invited to a private showing of a new Wax Museum that shows up in town. Let me ask you a question. If David Warner came up to you on the street and invited you to his creepy house at midnight to see his wax dummies would you go? Well these kids do so they must be in high school. I mean how could they get into college being that dumb?

Let me sort out the rest of the movie. All of the exhibits contain a personal effect of an evil figure from history. The Waxwork Man, David Warner, is using the museum to tempt people into stepping into the displays. If they do that they are transported into that world and become a victim powering that evil figure. If all the exhibits are successfully fueled, then the evil can enter our world and take over. We know this because Mark and Sarah, the two kids smart enough not to get pulled in, chat with Sir Wilfred. Wilfred was Mark’s grandfather’s best friend and it was Mark’s grandfather that was killed earlier in the movie. It is up to them to stop the evil from spreading into our world, which leads to a chaotic and fun finale.

As I get older I realize more and more how campy this movie is. Director Anthony Hickox clearly had his tongue planted in cheek on this one. The dialogue of the kids sitting around before the Waxwork is odd. The clothes and mannerisms are more reminiscent of a film noir from the forties than it is an eighties horror movie. There is also this strange character of Lecturer who is briefly in the movie but is the source of a couple gags. Won’t spoil them but much like the young victim characters it is strange. I love the fact that Waxwork feels a bit off, that is probably why it has always been so memorable to me.

When we get to the killings and bad guys the movie really starts to shine. We don’t get one, two, or even three monsters. We get many of them. There is a sequence with a Werewolf, another with a Vampire (damn that kitchen scene is gruesome), there is a mummy, and even some zombies. Along the way we get severed hands, cannibalism, a shredded throat, and much more. Each creature has its own little scene as they collect victims as well as showing up in the big finale where the monsters go head to head with those trying to save the world.

I’ve avoided the one “monster” that everyone always talks about. The Marquis de Sade is one of the exhibits and he gets ahold of Sarah, played by Deborah Foreman. If you aren’t a child of the eighties you might not know who she is. How can I put this best? She was a hottie that more than one teenage boy had a crush on. Strangely I wasn’t one of those. Maybe that is why unlike many I didn’t wear my VHS out rewinding the whipping scene again and again. She was also dating the director during the filming of Waxwork. Maybe he was trying to work some issues out on screen? Who knows? I wasn’t going to mention it, but I catch hell when I ignore stuff so there you go.

I love Waxwork and recommend it to anyone wanting to dip their toes into horror from the eighties that doesn’t involve a crazed killer and a body count. This is a unique and fun movie that has held up very well over the years.

Posted by Gutmunchers Lives at 9:19 AM No comments: