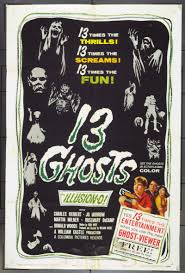 I love old horror movies and those of director William Castle are some of my favorites. All his movies have some sort of gimmick to sell it to the theater audience. Here the normally black and white movie is tinted blue so that using a special viewer to see the ghosts better or not see them depending on if you believe. I don’t have one of them but I believe I’m going to have a good time.

Cyrus Zorba is struggling to support his family. As the movie starts we see that the family’s furniture is being repossessed. That same day he gets a notice from a lawyer that his uncle has died leaving him a fully furnished mansion. The only catch is that the house is full of ghosts that were caught by the uncle in his research to the paranormal. They move in and the first night strange things start to happen. Not only are the ghosts restless but there is also a fortune in cash hidden in the house! The only question is should they fear the ghosts or the living who are trying to steal the money? One séance later and we have our answers.

This movie used to scare the heck out of me when I was younger. A dark house with ghosts and danger lurking around every corner pushed all my buttons. Probably because I’m older and have seen some much scarier stuff since it doesn’t affect me like that anymore. Still the movie does a couple of things well. Castle keeps the action moving briskly. Every scene is used to push things along to their conclusion. We get the backstory from a journal and a bit of dialogue here and there. In between are the spooky encounters with the ghosts of the house. Best of all while we have ghosts their intentions aren’t what we expect and the real villain might be someone with a pulse. This isn’t a straightforward haunted house movie which is a plus. Castle always made sure that there was meat on the bone.

Also, the characters are developed well and the cast is likeable. The actors and actresses have some chemistry, especially those portraying the Zorba family, and the performances are solid. While they might not be household names today Rosemary DeCamp, Donald Woods, and Margaret Hamilton were well established and had a lot of experience. Plus, Charles Herbert was a very popular child actor. William Castle always tried to get the best talent he could and as a group this might be the finest cast he ever assembled.

Okay I know that many consider this kind of movie to be cheesy and dumb. But it also has something that many newer horror movies don’t have. There is a commitment to quality as well as a respect for the work. Castle might have used gimmicks to make his movies stand out and pack a theater, but he still cared about what was on the screen. If you haven’t seen a William Castle movie or haven’t watched one in a while go back and check them out. 13 Ghosts is a great place to start. Don’t be surprised if I’m talking about another Castle flick here on the Blog soon.