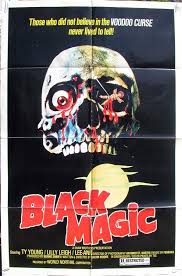 I like horror movies and I like Kung Fu movies so Black Magic seemed like a no  brainer. Hell, it was made by the masters of Kung Fu cinema, the Shaw Brothers. But somehow it took me almost thirty years to track it down and watch. But I did finally pick up a copy on DVD and pop it in the player a few months later.

I won’t confuse you with a bunch of names you will have trouble keeping track of anyway. The story here involves black magic and using it to create love potions and killing off those that you dislike. There is an evil magician who gets hired to cast a love potion so that a man can seduce a wealthy widow and take her money. It works, but only for a single night. The next morning the woman wakes up and figures out what happened. Instead of being angry she forces him to take her to see the magician so he can cast a love spell for her on a married man she is obsessing over. He does and she steals him away from his wife and friends. As if that isn’t enough she has him cast a death spell on the wife so that she will stop trying to get her husband back. The death spell is brought to the attention of a good magician who saves her and enters the battle so set things right. This sets the scene for an epic showdown. Good vs Evil on the top floor of a skyscraper.

Okay so first thing first, there is no Kung Fu in this movie. The battles are chanting and casting spells so that was a bit disappointing. I thought we would get some traditional martial arts but it isn’t that kind of Shaw Brothers flick. The other thing that I found a bit annoying was the pacing of the movie. It starts off with a bang and ends with a great sequence, but there are times in between that it drags. It isn’t terrible but I think there is some padding to stretch things out.

In spite of what I mentioned above Black Magic does have a lot going for it. It has a sleazy vibe that I didn’t expect from a Shaw Brothers movie. You get some nudity and the first love spell cast on screen is disturbing. I honestly had no idea you could cook rice like that! The death scenes involve a good amount of fake blood and we get several bodies breaking down to skeletal dust. I also thought the battle at the end between the magicians was fun. The effects work is a bit dated and don’t expect Savini level gore (Tom Savini is my gold standard you see) but for 1975 it isn’t bad.

While the end credits are rolling I always sit and try to get a grip on how I feel about a movie. Yeah, I know the Shaw Brothers don’t have end credits but the DVD menu works fine too. I enjoyed watching Black Magic, but I don’t know that I need to see it again. Maybe I might show it to friends but this isn’t going to go into my rotation of movies that I watch every couple of years. If you can find a copy on the cheap (I paid 5 bucks for mine) or get a chance to rent/stream it I think it is worth some of your time.