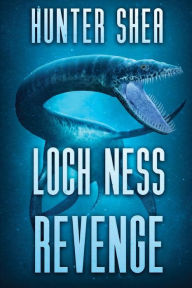 I don’t only watch horror movies. Sometimes I read a book! Well actually I read a lot of books, many of them horror/monster themed. When Loch Ness Revenge was recommended to me and I realized it was about Nessie I knew I had to check it out.

Natalie and Austin McQueen are on a family trip exploring Europe when their parents are killed at Loch Ness by a monster. Of course, no one believes them and the assumption is they are just traumatized by watching their Mom and Dad drown. Years later, helped by a big insurance payout, they are ready for their revenge when the creature or creatures reappear. They aren’t alone in their quest and are joined by Henrik, an acquaintance of Austin who has his own agenda and is willing to help the siblings. Armed with an arsenal and a pontoon boat they head out on the Loch to kill the legendary creatures (yeah there is more than one!).

The pacing of the story is great with no lulls in the action. Shea manages to establish who Natalie and Austin are as well as their motivations quickly so that we the reader can dive right into the fight with the monsters. That isn’t to say that he doesn’t develop all of the characters. The book is populated with people that jump off the page with their own quirks and issues. Even the minor characters have personalities. Many authors try to add depth to the people populating the story by forcing interludes that interrupt the proceedings. Shea just weaves it into the action without it being a distraction or disruption.

For a book with monsters I thought we would have a higher body count and perhaps a little more gore. Other than the description of their parents being attacked there isn’t much to talk about. When I’m dealing with monsters in either the movies or books I can never get enough of the gooey bits, especially when it is a book and the only limitation is the author’s imagination. This is really my only complaint.

There is nothing in this world that I love more than to sit down for a good creature feature. The giant bug movies of the ‘50s or the Godzilla movies of the ‘60s and ‘70s have given me hours of enjoyment. Occasionally I find a book that gives me the same giddy enjoyment and Loch Ness Revenge is one of them. The book is a quick read at one hundred fifty pages, so it is perfect for summer vacation. Hell, if you are brave enough you should read it on a boat in the middle of a lake and then go swimming!

Remember when I mentioned Henrik’s agenda earlier? Well his father was killed by the Orang Pendek, a Bigfoot like creature in Sumatra. The sequel to this book are the characters getting revenge on them. I’ve already got it on my Kindle. That is how much I enjoyed Loch Ness Revenge and Shea’s writing! If you have an eReader enjoying this book is just a couple of clicks and a small online transaction away. If not the paperback is available at all the big online retailers. I recommend it.

Posted by Gutmunchers Lives at 11:25 AM