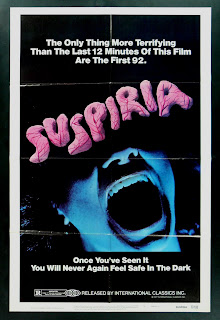 When I think of Italian horror I think Fulci’s Zombie and Argento’s Suspiria. When I heard the news that a local art theater was going to play the new transfer of the movie, courtesy of the fine folks at Synapse, I had to go. Now convincing my lovely wife to attend with me took a bit of effort but I was successful. Friday night after work we jumped in the car for the forty-five-minute drive to what I hoped was going to be an awesome night of cinematic goodness.

Before I proceed I thought it would be a good idea to lay things out for you. Since this is both the first time that I’m seeing the new transfer as well as being my first trip to the Nightlight I’m going to talk about both of them. But first I figure that I would review Suspiria in case you are new to the movie. If you are… shame on you!

I’ve seen Suspiria a lot. Like I said it is one of those movies that is the epitome of Italian horror so it has always been in heavy rotation for me since I first picked it up on VHS back in the day. The movie follows an American Ballet dancer, Suzi, who travels to Germany to attend an exclusive school. She arrives on a rainy night and as she steps to the front door of the school she passes a woman who is yelling about secrets and flowers. The door slams leaving Suzi in the rain. When she tries to get in she is turned away by a woman who we never see on only hear. The action then moves away from Suzi as we watch the woman run off to a friend’s apartment. There we find out she has been expelled from the school and is going to leave town. She never makes it as a mysterious killer shows up and does her in. The next day Suzi goes to the school and receives a much friendlier welcome. But clearly there is something dangerous and unsavory going on at the school. Soon she is caught up in figuring out the mystery.

Hopefully I’ve told you just enough to create some interest in the movie if you haven’t seen it. If I say much more there will be spoilers and I certainly don’t want to do that. What I will say is that I love this movie! The story is solid but what really makes Suspiria special are the visuals and sound. The way that Argento shot the movie makes it feel like a piece of art. Every time that I watch it I see some new visual cue that I missed on the previous viewings. He tells the story not just with the dialogue but also with the picture. Sadly, this leads to the most common complaint about the movie. If you don’t pay attention or just want the story stuck under your nose you probably will think Suspiria is “boring”. It isn’t you just have to pay attention to what is happening on the screen all the time. Adding to the spectacular visuals is an amazing soundtrack from Goblin with an assist from Argento. The music helps to create the mood in most if not all the important scenes. It helps to set the stage for what we are watching in a way that most other soundtracks don’t. Between the music from Goblin and the audio cues it simply doesn’t get any better.

I could go on about the movie but I’m going to assume that most people have already seen it. What they likely haven’t seen is the new 4K transfer from Synapse that has been traveling the country. As I’ve already mentioned above the visuals are important to the story and seeing it on the big screen was already a treat. But getting a chance to see the new transfer was a game changer. Honestly it was like seeing the movie for the first time. The colors are vibrant and jump right off the screen. It isn’t so much what is front and center in the frame but the sets and what is in the background that I noticed for the first time. I was completely blown away. This was the movie that Argento shot and how he wanted an audience to see it.

To be fair based on what I’ve seen from Synapse before I expected this new version of Suspiria to look amazing. They do a great job and obviously love these movies as much as we the fans do. Remember I mentioned the sound and how important it is to the experience? It never occurred to me that with all the work done on this restoration that the sound would benefit so much. On some of the copies I’ve owned the music has occasionally drowned out the dialogue a bit. I’ve always assumed that was supposed to happen, but after seeing this copy I was wrong. The music is also more jarring in spots than I remember it being in previous viewings. They did such an amazing job.

Before I wrap things up on this review I want to talk about the Nightlight. I had never been to the theater before. It is a small art theater that can accommodate around 50 people (I’m terrible at math but did try and count!) and is located in Akron Ohio. This was my first experience with a venue like this as I’ve never been an artsy type and the sorts of movies that I would expect to play here likely wouldn’t appeal to me. Now I feel like a bit of an ass because the theater was great. The seats were comfortable, the crowd friendly, and the vibe was killer. The audio and video were top notch and overall I’d have to say it is a great place to see a show. Hell, I loved it! I noticed they are venturing off into some more special showings that are definitely going to encourage me to make the forty-five-minute drive north.

Recap time. Suspiria is a great movie that everyone should take the time to watch. The new transfer from Synapse is incredible and is almost like watching it for the first time. Finally, the Nightlight theater is a great place to watch a movie. If only every Friday night were this much fun.