The Hunt for Atlantis by Andy McDermott

I not only watch a lot of movies, but I read a lot too. Not just horror either but a little bit of everything. That includes some good old-fashioned adventure stories like The Hunt for Atlantis.

The story starts off with an expedition finding a clue to the location of Atlantis in the Himalayan mountains. Before they get too far a mysterious group shows up and murders everyone. Fast forward to today and we meet Nina Wilde, an academic pitching her own plan to find the lost city to a college committee. Her funding is refused, but she is immediately contacted by a secretive billionaire named Kristian Frost. After some misadventures, he offers to fully fund her search and soon Nina is flying around the world with Frosts’ daughter Kari and her bodyguard Eddie. Much discovery, betrayal, adventure, and death follows them. Do they find the lost city? Well duh of course they do. But that isn’t the end of the story.

This is one of those books that I really couldn’t put down. The plot is engaging and full of twists. Just when you think you might have it figured out McDermott tosses something new at you. Characters you like become villains and the villains become someone you can root for. Of course we have all seen this done before and honestly most of the time it doesn’t work. But here it is executed so skillfully that I was sucked right into rooting for what was a horrible person who was recently trying to murder our heroes. 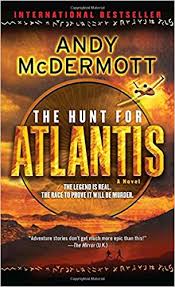 Another thing that the book does well is capture all the locations that Nina and her companions visit. They start in Norway, fly to Iran, head to the Amazon, visit the Himalayan mountains, and finally end up back in Norway where they started. McDermott does an excellent job setting each unique location up with his vivid description of the locations. You feel like you are right there with the characters as they work to unravel the mysteries.

Finally I wanted to talk about the characters and the self-aware attitude that the author brings to the table. First the characters have defined and predictable personalities. You feel like you know them and because of this they jump off the pages. I found myself rooting for and against them and when someone was put in danger I had to read just one more chapter. This made for some very late nights, which is a common theme when I’m enjoying a book.

Second this being a book about an archaeologist running around the world solving ancient puzzles and having to escape almost impossible situations puts it solidly in an established genre. McDermott knows this and has Nina and the rest make comments and references to Indiana Jones as well as Laura Croft. I loved this because it puts the characters in the same world that we all live in. To me that made it even better read.

This was an impulse purchase, you know because I already have a stack of books to get to! It wasn’t until after I finished that I realized this was only the first in an established series from McDermott. Looks like I’m going to have some more for the to read pile. If you haven’t figured it out yet this is a recommendation from me.