Throwback Thursday - An interview with director and author Gregg Lamberson

Since I missed my normal Monday post I thought it might be time for another Throwback Thursday. Digging thru my archives I stumbled on this interview. It was supposed to go into a book that I was writing, but when the publisher dropped out it never happened. That is a damn shame since I think that Gregg is one of the most interesting people that I've ever had the chance to interview. So I dusted it off and present it here. Also you might have noticed that Slime City was one of the movies that my friend showed at his outdoor theater. I have a write up for it here.

John Shatzer - What got you interested in being a filmmaker?

Gregg Lamberson - I was a child of TV, and loved monsters in cartoons and later in movies.  That love extended to science fiction and action.  I had various obsessions, like the Sinbad movies, the Planet of the Apes series, and Logan’s Run, and I fluctuated between wanting to be a comic book artist and a stop motion animator.  Then I saw Star Wars when it came out and knew I wanted to write and direct.

JS - How did you get your start?

GL - I went to film school for a year, but I hated making short films.  Basket Case was playing as a midnight movie, and I worked at a theater that showed The Deadly Spawn and The Evil Dead, and I knew I wanted to make a 16m feature and blow it up to 35mm.  I wrote the script for Slime City, but I didn’t know what the next step was, so I volunteered as the production manager on I Was a Teenage Zombie.

JS - What was it like shooting low budget movies in New York City in the 1980s?

GL - It was the best time of my life!  When I didn’t live near Times Square I worked there, and a hundred crazy experiences.  I saw midnight movies all the time, or went to screenings where key creative people did Q&As, and people like Frank Henenlotter came into a videos tore where I worked.  I saw Henry: Portrait of a Serial Killer and Re-Animator in Times Square during their original runs.  Making Slime City was an awesome experience, but so was working on Brain Damage.  He, even Plutonium Baby was a blast.

JS - Slime City is one of my personal favorite low budget horror movies.  Where did you come up with the story?

GL - Some of it was autobiographical: I moved to NYC from a small town at the age of 17, and my dorm was a YMCA on 34th Street, eight blocks from The Deuce.  We ate breakfast in a diner with pimps and prostitutes, and faced the Moonies cult daily.  All of that stirred my imagination, and so did Peter Straub’s Floating Dragon, the movie The Wicker Man, Rosemary’s Baby, and The Evil Dead.

JS - More then 20 years later you released the follow up Slime City Massacre.  Can you talk a bit about how this production came to be?

GL - I never intended to make a sequel to Slime City, and after the diminishing budgets and rewards of my films Undying Love and Naked Fear, I gave up filmmaking in favor of being a novelist.  2008 marked the 20th anniversary of Slime City, and I did a series of screenings at film festivals and horror conventions with different cast members, and the ideas for a sequel kept coming one after another.  I knew I had to write the script, and I knew that if I wrote the script I would have to make the movie, to prove I could make a movie that was good and not just good for it’s budget.  We shot the film a year later, in July of 2009 – 23 years and one month after we shot the original.  It premiered in 2010, and I screened it at a bunch of festivals and it won several awards.  Then it was released on DVD – and then we got a limited theatrical release from a distributor, and in 2012 we’ve already accepted four requests for special screenings.  I’m pleased with the film, I’m pleased with the reaction to it, and I’m pleased that it’s still playing on big screens.

JS - One more Slime City question.  As a Slime City fan I have to ask if we are going to have to wait another 20 years for the follow up?

GL - It’s hard to say.  I know what the story for Slime 3 is and I’ve started the script, but the economy is in terrible shape.  We were lucky with Slime City Massacre: thanks to a little known tax code called Section 181 that was part of president Obama’s stimulus plan, most of my investors were able to write off their investment the year we finished the film – a record! – and then we got a $15,000 advance from our DVD distributor at a time when distributors are no longer paying advances for low budget horror films.  How do I ethically approach investors when the situation is even worse now?  I can’t.  Then there’s my career as a novelist; I actually make a living doing this, as opposed to making films, which I love, but which drain my time, my resources, and my life.  But unless something tragic happens to me, there will be a third and final film in the series.  I actually don’t mind waiting; I think that made Massacre special.

JS - In addition to the Slime City movies you also made one of the most interesting vampire movies that I’ve ever seen.  This of course was Undying Love.  Can you talk a bit about the making of this one? 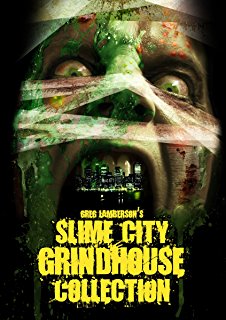 GL - Thank you.  Until SCM, it was my favorite of my films.  As anyone who’s read my novels can tell you, I love noir as much as I love horror, and Undying Love was an attempt to meld a vampire film with Double Indemnity.  It was more of an anti-vampire film, like George Romero’s Martin, which I love dearly.  We shot it in 16m for $35,000 - $15,000 less than Slime City – over my two-week vacation from my job.  We shot it in the same Brooklyn apartment as Slime City, with the walls painted numerous times.  It received better reviews than Slime, but its midnight run was hampered by several technical problems at the theater, which prevented word of mouth from building.  It took me something like six years just to get a VHS deal, and now it’s available as part of the 2-disc DVD Greg Lamberson’s Slime City Grindhouse Collection.

JS - You made another great movie called Naked Fear.  The main character suffers from agoraphobia.  This is an interesting twist where did it come from.  Also what challenges did shooting in mostly one location create?

GL - Slime City starred my friend Robert Sabin, and Undying Love starred my friend Tommy Sweeney, and I wanted to do a story that would pit the two of them against each other in equal roles.  I also love The Odd Couple, and I wanted to make a thriller about a serial killer trapped in an apartment.  When I wrote the script, I realized I needed to go to a second apartment, so that evolved.  Robert and Tommy are both in Slime City Massacre as well, as is Mary Huner-Bogle, who was involved in all three of my previous films.  I’m building a long-term repertory company, and now I can add Debbie Rochon and Brooke Lewis, who have become good friends of mine after SCM.

GL - My first three novels were based on screenplays I wrote for budgets much bigger than I could ever raise on my own: Personal Demons, Johnny Gruesome and The Frenzy Way.  Personal Demons, which won the IPPY Gold Medal for Horror and the Anubis Award for Horror, is book one in my occult detective series “The Jake Helman Files.”  Jake Helman is my favorite creation.  The next three books have either been published or written: Desperate Souls, Cosmic Forces and Tortured Spirits.  They’re also available as audio books.  The Frenzy Way is a reinvention of werewolf mythology, and the first sequel The Frenzy War, has been completed.  Johnny Gruesome is my one standalone novel, and it’s aimed at Slime City fans.  I’ve also written a nonfiction book, Cheap Scares: Low Budget Horror Filmmakers Share Their Secrets, and one novella, Carnage Road.

JS - Also how does telling a story as an author differ from making a movie?

GL - My novels tell me to tell action packed stories with dozens of characters, unlimited scope, and special effects that are only restricted by my imagination.  Moviemaking is about conquering daily challenges and finding compromises due to budgetary constraints; they’re also very collaborative enterprises.  When I write a novel it’s all me, and I don’t need to compromise or settle for less.  In general, writing novels is more satisfying, but making Slime City Massacre was a pretty extraordinary experience.

I hope that you enjoyed the interview. If you did let me know. I have several more tucked away on my computer that I'd be happy to clean up and share on the blog.