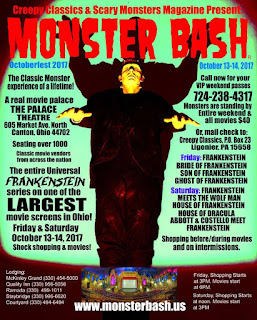 I’ve returned to the Palace Theater for another event, this time around it was for Monster Bash. If you haven’t read my write up for the Twilight Zone Fest the Palace is a historic theater located in downtown Canton. I’ve attended many events there but this is only the second time that I’ve written it up for the horror dude blog. It is a great place to see a movie, especially an old one. Which brings me to the festivities.

Monster Bash took over the Palace for a unique event. All eight classic Universal Frankenstein movies in order over two days. Four on Friday night and four on Saturday. As an added bonus the lobby, both upstairs and downstairs, was packed with vendors. This soon after Cinema Wasteland you wouldn’t think that there would be much for me to purchase, but you would be wrong. Let me kick things off with Friday.

Friday was a beautiful Fall day, nice and warm until it got dark and chilly. This is the perfect combination for October. It felt like the work day would never end, but finally I looked up and it was time to jump in the car and head to the event. I was interested in what vendors would show up as I knew there would be time for spending money between screenings. As it turned out there were some people I didn’t recognize and a couple that I did. Of course, Creepy Classics (I think they run Monster Bash) and local horror host Son of Ghoul were there. But before I went shopping I had movies to watch.

Again, they played them in order so the first movie on Friday was 1931’s Frankenstein. I’m going to assume if you are here at the horror dude blog you have likely seen these classic Universal monster movies before. But just in case you haven’t… Dr. Frankenstein decides to play God and bring life to a creature made out of body parts. Things go badly when his assistant gets the brain of a violent criminal which makes the creature not turn out so well. Karloff is brilliant, especially in the scene where he is playing with the little girl. He brings an innocence to the creature that is necessary for the movie to work. If you don’t feel a little bad for the monster then the story loses some emotional impact. 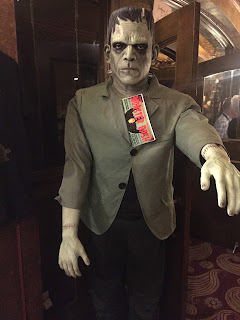 Next was Bride of Frankenstein from 1935. Karloff is back as the creature in what is an even better movie than the first. This is one of the few times in cinematic history that a sequel has exceeded the original. Here Karloff is allowed to speak as the monster has begun to acquire language skills. The theme of Bride is that he is lonely and keeps searching for a companion. This leads to the monster and another scientist forcing Frankenstein back into the lab. But when that doesn’t work out the creature allows the newlyweds (the good doctor has recently been married) to leave while destroying himself and his bride.

Son of Frankenstein followed in 1939. This was Karloff’s last appearance as the creature on the big screen, though not his last in the series. I’ve always been disappointed in Son because the monster doesn’t speak. Why would they ditch one of the highlights of Bride and something that allowed Karloff to bring more life to the character? I’ve always wondered if this is what finally caused him to stop portraying the monster. We do get an awesome performance by Bela Lugosi as Ygor, the manipulative hunchback that uses the creature to better his own lot in life. Also, if you are a fan of Mel Brook’s Young Frankenstein this is the movie for you. Many of the characters from that movie were the inspiration for his comedic take on the legendary franchise.

The last show of the day was Ghost of Frankenstein from 1942. For the first and only time Lon Chaney Jr. plays the creature. Honestly this also marks the point where the Frankenstein monster becomes nothing more than a plot point for the other characters and creatures to play off of. Chaney mugs for the camera and does his best Karloff impersonation but the life is out of the monster, pun intended! Lugosi is back as Ygor, who manages to survive the hail of bullets that should have killed him in Son of Frankenstein. He is amazing again in the role. We also get some brain swapping fun for what is an overall decent movie. Not as great as Bride, but better than what will be coming later.

After the last screening, the Monster Bash staff did the prize toss. This is a tradition at their events where the staff tosses a bunch of free stuff into the audience. I did pretty good with some plastic cups and a cool zombie Halloween decoration that is now in my car. I also did some shopping picking up some Blu-Rays, a DVD, and a couple of t-shirts. The highlight for me was grabbing one of the MGM Midnite Movie double features I didn’t own, Beast Within and Bat People. I also got the Blu-Ray of Dr. Terror’s House of Horrors. That was it for Friday night. I headed home to get some sleep and be back the next day at 3 p.m. for more classic Universal fun.

I’m old so it was good that Saturday didn’t start until later. I need my sleep! I did arrive as the first movie was starting. Frankenstein meets the Wolfman, made in 1943, marks the one and only time that Bela Lugosi played the monster. He and Chaney Jr. switched things up since the Wolfman is Chaney’s signature role and Ygor was dead this time. Of the four men who played the monster in the classic Universal movies Lugosi was by far the worst. He is barely on screen except to fight the Wolfman. When he is onscreen there is little to see as he lumbers and growls, but not much else. Again, the Frankenstein monster is reduced to minor character in spite of his name being in the title! In my opinion, this is the second weakest of the Universal Frankenstein movies.

The next movie was from 1944, House of Frankenstein. This one is notable for a couple of reasons. First this was Glen Strange’s first appearance as the monster and second it is Karloff’s return to franchise. Karloff is great as a mad scientist trying to continue Frankenstein’s research and perfect the monster so it can get him some revenge. Along the way he meets Dracula and ditches him on the road with some villagers in pursuit. Dracula just can’t help himself when it comes to the ladies! This would seem like a perfect chance for Lugosi to return, but instead we get John Carradine as Dracula. No disrespect meant but it just isn’t the same. Lon Chaney Jr. was back as the Wolfman and we do get a good monster fight at the end.

1945’s House of Dracula was next up. Again, Universal puts a monster’s name in the title and then quickly kills it off. There is also no Karloff mad scientist. While we do get Lon Chaney as the Wolfman there isn’t a monster fight at the end. By the time the locals show up Chaney’s character has been cured and is running away with his love interest as the Frankenstein monster burns up yet again! This movie is my least favorite and disappoints every time that I watch it. I wanted the monsters to fight! 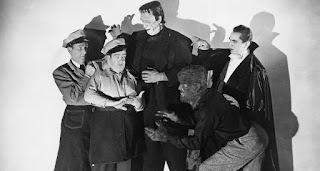 Finally, we get to the movie that I’ve been looking forward to since they announced Monster Bash at the Palace. Abbott and Costello meet Frankenstein. The only thing I might love more than the Universal monsters is Abbott and Costello. These guys are incredibly funny and it was pure genius teaming them up in these “meets” movies. The best of which has to be meets Frankenstein. If that wasn’t enough to love this is also the second and last time that Bela Lugosi would appear as Dracula. Seriously they never let him play the character between the original classic and this last hurrah of the first wave of Universal monster movies. The movie is great, has a lot of laughs, the monsters look cool, and unlike House of Dracula we get monsters fighting in the finale. This includes the Wolfman vs Dracula! I love this movie and it was an amazing way to end Saturday. Plus my man Vincent Price makes a small cameo of sorts.

I did some shopping and picked up a couple of Blu-Rays during intermission. Nothing of note, just filling in some Amicus holes in my collection. Looked for some t-shirts, but sadly they had none that would fit the fat man (which is me!). I was also bummed to see that Son of Ghoul wasn’t there on Saturday as his table is always full of great things to impulse purchase.

Monster Bash was a great time and I’m so glad the guys at Creepy Classics and the Palace Theater made it happen. They said that they would be back next year. If you do come back I’ll be in the audience watching whatever awesomeness you decide to show. For more about Monster Bash and their summer show check them out here. To see what other fun the Canton Palace is up to including the Three Stooges Marathon in November check out their website here.