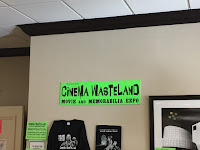 Cinema Wasteland is like my home away from home. I’ve been going for a long time and hardly ever miss a show. For this show the focus was on the old days of the Mom and Pop video store. The guest list and movie showings reflected that and it looked like another great weekend was about to happen.

My Friday started like most Wasteland Fridays with me sleeping late. It is important to get ready for a couple of late nights so adjusting to “Wasteland” time is a must. Especially since I chose to drive back and forth. I’m fortunate that I live near enough that I can sleep in my own bed and save some money for the dealer’s room. More on my purchases later. I got up late and had a nice lunch before heading up to the convention. I arrived early and picked up my weekend pass and took a seat in the bar waiting for the festivities to start. Not a big drinker, but it is a good place to see some familiar faces. Sure enough I saw one of the vendors who also happens to be a pal of mine named Scott. We chatted for a bit and before you knew it the show had opened for business.

It has been a long time since I had an extensive wish list of movies that I wanted to add to my collection. The last few years I’ve been weeding things out and downsizing. During that process, I realized there were some must have flicks that I’ve never owned on DVD or Blu-Ray and haven’t seen in a while. Plus, some killer stuff has been coming out. With that in mind my first stop was the dealers room. The highlights were Rawhead Rex, the killer House and House II Blu-Ray from Arrow video, the Warlock Collection, and a Paul Naschy movie I recently heard about called The People who own the Dark. I also checked in with 42nd Street Pete to pick up my copy of Grindhouse Purgatory. I highly recommend the magazine and not just because I write for it! Pete also hooked me up with a bit of Charlie Chan memorabilia that I’m getting framed. I’m a huge nerd for that series.

The rest of Friday was spent hanging out with friends. Went to supper with the Flemings and Tim Gross of Gross movie reviews. Tim was the guy who turned me onto the Naschy flick I mentioned earlier. We ate and shot the breeze about horror. The only event that I attended on Friday was the guest event with Dyanne Thorne. She talked about her career and chatted with the fans. There was a good crowd and it was fun to hear her discuss the Ilsa series as well as the movie they screened before the panel, Point of Terror. Hell, we even got some classic Star Trek series in there as well.

That wrapped it up for Friday. Saturday I got up early, fortified myself with my McDonald’s breakfast (not healthy but you got to live it up sometimes) and headed back. I browsed the dealer’s room again until 10:30 came. Hangover theater is a tradition on Saturday mornings at Wasteland and they always play some old movie. If you have payed attention to this blog at all you know I’m a sucker for this stuff. I have seen Michael Landon in I was a Teenage Werewolf many times, but never on film. I love that they play this stuff on 16 mm and it was cool seeing it like it was meant to be seen. I spent a few minutes with my friends Eric and Angie who came up before heading back into the film room for some Three Stooges, also on 16 mm, thanks to the Son of Ghoul.

When the Stooges were over I grabbed some lunch with Eric and Angie. Again, I got to spend some time shooting the breeze with other fans and get some movie talk in. Where I live I don’t have many people who like the same stuff that I do so Wasteland is a great place for me to get my movie nerd on. We got back in time to sit in on the panel with David DeCoteau, Linnea Quigley, and Brinke Stevens after the Nightmare Sisters screening. Just like the Dyanne Thorne panel the night before it was great. Between the three of them they have worked on so many killer projects and with so many interesting people it made for a fascinating hour. The stories about coming to Hollywood and seeing each other at auditions were fun. Speaking of fun, I had no idea that DeCoteau was so damn amusing. This was the highlight of the weekend for me.

I did some shopping on Saturday. I picked up some Blu-Rays for Demonoid, Hobgoblins, Frightmare, and Blood Diner. Honestly it was about time for me to finally retire my bootleg DVD of Blood Diner. I can’t wait to check out the special features and see the movie all cleaned up. I know that a lot of fans hate Blood Diner but I’m a huge H.G. Lewis fan and love the vibe that the movie has. Blood Feast had to of inspired them! I’m interested in Hobgoblins as well. I mean I love all things Ghoulies so this seems like a movie that I might enjoy. And I almost forgot that I also picked up the Arrow Video Blu-Ray set of the first three Hellrasier movies. That is a series that I need to revisit and now I can do so in style. The other thing of note that I picked up was the book put out about Empire Pictures. Since the theme of this Wasteland was the VHS days I had to add this to my library. Love or Hate him Charles Band put out a lot of the tapes we were all renting back in the day.

The dealers room closed at seven and I grabbed supper with Scott and Amanda. There is a killer Shawarma place down the street from the hotel and it has become a tradition that at some point in the weekend we eat there. Afterwards we headed back to the show. I normally stay and hang out with everyone or catch a screening. I did spend a few minutes in movie room two but the movie that I won’t name here was garbage. I chatted for a few minutes but for whatever reason the crowd was thin and things were dead. Neither of the movies playing on 16 mm interested me that much so I left by 10 p.m. for the first time ever. Not going to lie it was a disappointing end to a decent weekend.

Since I don’t want to end things on a downer I thought I’d talk about the April show. Ken always announces the guests for the next show at the current one. There are some familiar faces coming back and there is one big surprise. Never in my wildest dreams did I think I’ve ever meet someone involved in Manos the Hands of Fate. Well come April that is going to change. Jackie Neyman-Jones who starred as a child in the movie is coming to Wasteland. Maybe there is something wrong with me but I’m genuinely excited by that. Between her and me finally getting a Michael Berryman autograph I’m looking forward to it! See everyone in April!

© Copyright 2017 John Shatzer
Posted by Gutmunchers Lives at 9:44 AM