Road Trip to the Capital Theater - 12 Hours of Terror 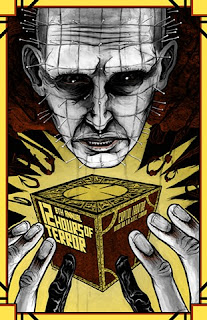 October has always been a big month for screenings, conventions, and events. Part of my tradition is to attend 12 Hours of Terror at the Capitol Theater in Cleveland. Now to be fair in all the years I’ve attended I’ve never actually made it for all 12 hours… I am an old guy you know. But every year I stick around as long as I can. With that in mind I stayed up late on Friday to try and adjust my sleep to allow me to make it to as many flicks as possible Saturday night. I did sleep past noon, but my dogs simply weren’t going to stand for much more! The little buggers like to annoy the heck out of me and the lovely Mrs. Horror Dude.

I was awake and after running some errands got ready for the hour long drive up to the theater. It wasn’t a bad drive, but parking was a pain in the ass. The theater sits in a nice neighborhood with restaurants and bars and being it was a beautiful night things were busy. But after half an hour of circling like a vulture I did find a place on the street not too far away. Really it gets a bit cut throat parking in the city sometimes! The car parked, ticket purchased, and soda/popcorn in hand I went to find a nice seat.

This year I was flying solo, which made it much easier to claim an aisle seat towards the back. For me having that bit of extra leg room and being farther away from the screen is perfect. I was very pleased where I ended up. Before the movie they had the first drawings for door prizes and went over the rules. One of the things that I love about 12 Hours of Terror is that they put up with no crap. No phones, talking, or this year snoring allowed! I didn’t pay to get in so that I could deal with rude people and that is how they feel too. With this out of the way it was time for the first movie. 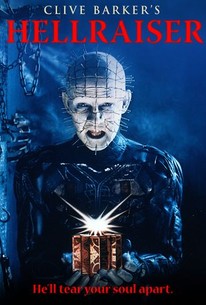 I haven’t watched Hellraiser in many years. I was never a huge fan of the series, though I do own it. This might be a movie that was hurt by the sequels that followed because I enjoyed the heck out of it. Maybe watching the movie with an audience or perhaps my tastes have changed but this was much better than I remembered it being. The movie was creepy, gory, and entertaining. It also surprised me that we didn’t get much time with the Cenobites. They are a much bigger part of later movies so it was odd to see them relegated to second banana.

Between this and the next screening they played some music videos that all were connected to horror movies in some way. They started off with Motorhead’s Hellraiser. This was tied into the third installment of the franchise, but was still cool to see here. We also got some M.C. Hammer Adams Family action and of course got to have the Fat Boys video with Freddy Krueger. Nice way to pass the time before the next feature.

Rawhead Rex is another Clive Barker adaptation and one that until recently I hadn’t seen in years. I picked up the Blu-Ray earlier in the month at Cinema Wasteland. I’ll eventually post the review I did after watching the disc here at the blog, but in short it wasn’t as good as I remembered it being. The effects work weren’t as gory and the creature wasn’t as impressive. But much like Hellraiser seeing it with an audience made it much more fun. Since I had seen the movie recently and it was fresh in my mind I knew when all the really bonkers stuff like the “baptism” was coming and got to see the audience reaction. Oh, and to backtrack before the screening they asked who had seen the movie before and just a few of us had so this was all new for most of the audience members. That made it so much more fun for me. Still not a great movie but it was a good time.

After this one we got a few trailers for movies that the Capital or their sister theaters in Cleveland would be showing over the next couple of months. The highlights were the original Halloween and Christmas Evil. A few years ago, I was in Austin and got to see Halloween on 35 mm at the Alamo Draft house. And last year I sponsored a screening at the Lions Lincoln Theater to show it. Cool to see in the theater, but I’ve been there and done that. Christmas Evil on the big screen in December, now that is an interesting idea. Next up was the mystery screening. 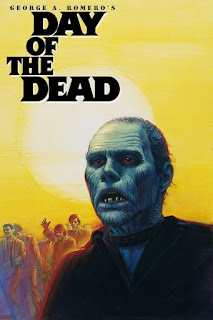 Every year 12 Hours of Terror has one surprise movie that they don’t reveal. The ones I can remember were The Bay, a found footage movie, that was okay. They also did Maniac Cop, which was badass! I was there when we got a chance to see Scouts Guide to the Zombie Apocalypse a couple of weeks early. It is always fun speculating between the first two movies what this year’s surprise might be. So, what was it? I’m ashamed to say that it never occurred to me that they might acknowledge the passing of George Romero by showing one of his movies. But that is exactly what they did.

When the first note of the music for Day of the Dead hit there was an energy in the theater as the horror nerds in attendance realized what we were going to see. As big of a Romero fan as I am I had never seen Day on the big screen and it was a thrill. The fact that the audience was so into the zombie mayhem on screen made it even better than Day of the Dead normally is. One interesting thing that I noticed was how racist some of the dialogue from Steele was. I always knew it was there, but seeing people of color reacting to the character was completely new to me. There was a special cheer when both he and Rhodes met their ends. Not to beat a dead horse but this is why seeing a movie with an audience kicks ass!

It was getting late and I knew that I only had one movie left in me. Luckily it was Motel Hell, which was the flick that I was most excited to see. This is a movie that I never thought I’d see in a theater. I love the movie, but let’s be honest it’s Motel Hell so what are the chances? Again, I have to mention that seeing it with an audience was an amazing experience. The laughs were plentiful and the gasps when bad things happen were even more fun. I thought that the nice lady sitting down the row was going to get ill when the scalpel came out to keep the “animals” quiet. The best part is when the audience finished the line, “It takes all kinds of critters to make farmer Vincent’s fritters”. 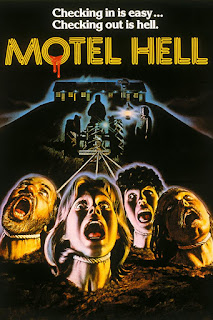 Even leaving when I did it was still after 5 a.m. when I finally pulled into my driveway. This was another great night filled with horror movies that a couple days later I’m still buzzed about. If there was a common theme for the evening it was the added bonus of watching these with an audience. Like anyone else I do like that I can collect my favorites and pop them in anytime that I want to. But at the same time movies were meant to be a shared experience and seeing them with other fans brings so much extra enjoyment. If you get the chance to go to a screening or an event like this do yourself a favor and go for it. Even if you are an old guy that won’t make it till the end!