Becky is your typical tween girl, I think she is thirteen, who is taken out of school early by her father. She is still trying to get over the loss of her mother and her Dad, played by comedian Joel McHale, is taking her to their lake house. This annoys Becky since she is angry her father is selling the place as it was apparently important to her late mother. He surprises her with the news that he has changed his mind and that they are keeping the house. Though that news is followed by the arrival of his new girlfriend and her son. Becky is not amused. 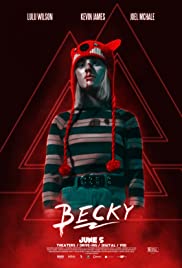 This family drama is only half of the story. We are also introduced to a skin head Nazi who with the help of some of his cronies breaks out of jail and murders a bunch of people on his way to retrieving a key that is very important to him. A key that was hidden at the same lake house that Becky and her family are currently spending the weekend at. Of course, she found the key when she was younger and has it tucked away with her other treasures at her clubhouse in the woods. Things get violent, nasty, and bloody as Becky decides to go to war with the men.

Where do I start with this movie? I suppose the first thing I should say is that there will be spoilers coming. This is one of those movies that is almost impossible to talk about without dropping some big plot twists on you. I’d recommend that you go watch the movie before reading any further. Seriously Becky is a great movie that I don’t want to ruin for you. Now that you have been warned I’ll continue.

The story is solid and paced very well. The characters are established quickly and effectively before being tossed to the action. We know who is who and the role they will play in the story. That said I love how the movie throws one huge twist at us. As the story develops Becky goes from your typical angry teenager dealing with the loss of her mother and her father moving on with his life to something else. Right away the story is drawing some interesting parallels between Becky and the killers.

The fight at school and the prison sort of mirror each other and in a way begin to set up what happens later. Then of course we have the big speech from the Apex character (one of the killers) who tries to leave and warns Becky that the violence she is committing will “stain” her. When she finally snaps and starts murdering the men whom invaded her home, I did say there were spoilers, it seems logical. The ending with her sitting in the interview room clearly telling the police and social worker what they want to hear is disturbing. From the look on her face and the fact that we just watched her straight up murder people the movie hints that not only is she changed by the violence but that she sort of liked it. That is a cool twist.Kevin James is fantastic as the racist gang leader looking for his key. This is a guy that normally plays the loveable goofball but is cast totally against type here. Not only does he pull this role off, but he is genuinely scary. The character isn’t just a unfeeling murderer but the movie also establishes that he is a charismatic leader that can manipulate his followers into doing some horrible stuff, including killing kids. I never would have thought that James would be able to give this sort of performance, but he nails it.

Lulu Wilson, the young actress that portrays Becky, is incredibly good. Her performance could have been over the top but is instead quite subdued. The more violent that her character gets the more glossed over and empty the look on her face is. This is so creepy and is by the end of the movie a huge kick in the butt. The girl wasn’t right to begin with, but we get to watch as she slowly snaps. The fact that this works at all depends heavily on Wilson’s performance and much like James she nails it.

In addition to two excellent performances, we get some violent deaths on screen as well as some implied offscreen. There is a death by craft supplies, an outboard motor to the chest, and an execution with a bullet to the head. That last one was really cold and sort of seals the deal on what we are watching. The fact that it interrupts another big speech from the Apex character sort of tells you where Becky is at by the end of the movie. But my favorite death in the movie has to be the ATV to the face. Well really by the time she rolls off and we see the results there is only half a head left. But still it is obvious what happened. There is also an awesome gag with an eyeball that is the most explicit and extended bit of gore in the movie. It was also informative in that I learned safety scissors aren’t the best way to sever an optic nerve. Becky is a great movie that I’m going to recommend, but there is one thing that I want to point out. We have the Kevin James character being a racist Nazi whom we have already seen ordering his men to murder children. What I haven’t mentioned is that Becky’s father is dating a black woman, so when the bad guys show up I was expecting things to get really nasty. I mean a mixed-race couple… that had to be on purpose. Other than talking around the issue by using the idea of keeping dogs purebred and not “muddying” the blood this is basically glossed over. Why is our homicidal racist Nazi talking around this? Would he not take the time to be a dick about it?

I get that I watch a lot of exploitation movies which might have my expectations different from your normal movie viewer. I also understand that in the current climate that sort of language might not be acceptable and could hurt the movie’s commercial chances. But it just seems like an odd choice and a missed opportunity. If you are going to put a scumbag character in your flick, then go the whole way and make them realistically shitty. Again, that is just my opinion and, in the end, doesn’t affect my enjoyment of and recommendation for Becky. This is a great flick that I encourage everyone to check out and support.