Here we have another remake that does a good job acknowledging the original while ramping up the gore and violence. Before I spoil too much, I’ll just point out one thing. Like the Dawn of the Dead remake The Crazies also uses a bad ass Johnny Cash song in the opening credits. Maybe the next time someone decides to make a crappy Day of the Dead flick they should think about adding some Cash to their soundtrack. It certainly couldn’t hurt. Now onto the movie. 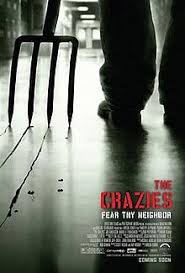 The movie briefly shows us how the town is going to end up before jumping back to before shit hits the fan. We met David, the sheriff of Ogden Marsh, and his wife Judy who is the local doctor. They are expecting their first baby and are generally enjoying life in their small Iowa town. One day while watching the local high school baseball game a local walks out onto the field carrying a shotgun. David tries to calm him down, but it goes poorly, and he ends up shooting the man. The man was a recovering alcoholic, so everyone assumes he fell off the wagon. But then the autopsy comes back with him not having a drop of booze in his blood.

Soon after this another man kills his family by locking them in a closet and burning the house down. Then more people start acting strange. When some hunters find a body attached to a parachute in the woods the David and his deputy go looking for a plane. They find one crashed in a marsh that feeds into the town’s water supply. Suddenly all communication with the outside world is cut, the army shows up, and people start to get crazier. Our survivors find out that the plane was carrying a bioweapon and when it crashed it was unleashed on the town. Who is sick and who isn’t? That is the question they keep asking themselves as they attempt to dodge both the army and the now homicidal sick people, all of whom are trying to kill them. 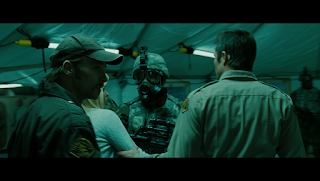 I catch some heat for my love of Romero’s The Crazies, but I don’t care. I think that movie is a wonderful bridge between Night of the Living Dead and Dawn of the Dead. So, my standards are pretty high, and this movie met them. The pacing is brisk as we get right to the good stuff and never have a slow spot. We see the beginning of the outbreak and watch as the town quickly falls apart. The script does a good job of keeping the characters in the dark until it is revealed by a scientist trying to get out of town exactly what is happening which also serves to fill in the blanks for the audience. By then they have already been thru hell and lost several of their own to the murdering infected. It makes for a fun ride.

If I had to make one observation where this movie was better than the original, it would be the crazies themselves. This is treated as a sickness that has stages. First the infected get real quiet and sort of disconnect with those around them. Then they seem to start with some obsessive behavior before finally snapping and calmly committing murder. Physically the makeup effects change as well. It starts with bloodshot eyes but ends up with pasty skin with veins showing thru. They do a great job of making this disease feel like it is running its course while destroying those infected with it.

The kills are plentiful in the Crazies with eleven on-screen and many more implied off-screen. Some highlights are a knife to the throat, a hanging, death by oil change, a couple pitchforks to the chest, and my favorite the bone saw to the torso. They don’t shy away from the gore and I appreciate that. The settings for some of the kills are a fun as well. We get people strapped to beds watching a crazy kill people (the aforementioned pitchfork) as well as a surprisingly creepy sequence in a car wash that ends with that hanging. Not only is the gore good but the kills are well thought out and creative. Not too shabby.

What else can I say about this one. There is a fun cameo from Lynn Lowry who starred in the original which I enjoyed. There is also a fun gimmick with us watching a satellite zoom in and out that foreshadows what is about to happen as well as giving the proceedings some scope. The outbreak is much bigger than the movie shows us. I really can’t think of a bad thing to say about The Crazies. It’s a good movie and I recommend it.

Posted by Gutmunchers Lives at 1:36 PM